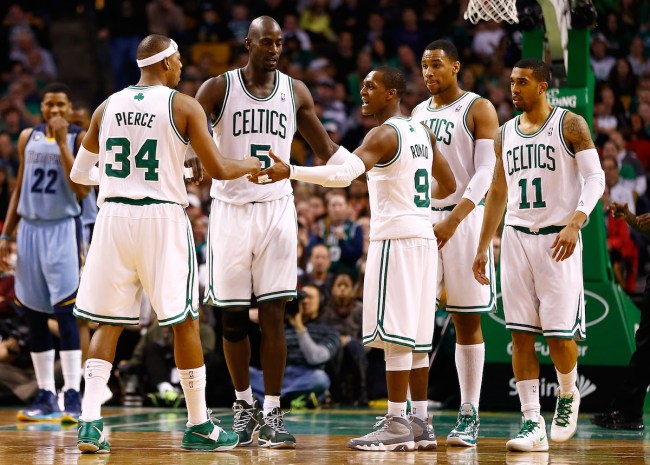 Kevin Garnett is a competitive person with a fiery personality who loved to trash talk. KG typically backed up his mouth on the court, and sometimes, 30K feet up in the air.

This week, former Celtics teammate Brian Scalabrine was a guest on The Lowe Post, and recalled a story during a team flight that involved KG, Glen “Big Baby” Davis, Paul Pierce, and an arm-wrestling contest with some serious money on the line.

Here’s a recap of the appearance, written up by a fan on Reddit.

It’s the 08/09 Celtics season. Scalabrine explained that this was the wildest team he ever played on. Keep in mind, this is with Tony Allen, Starbury, Perkins, and KG. Some notorious Alphas.

They bet money on everything: Shots in the game, free throws, poker, dice, cards, you name it. Guys would bring boxing gloves to the locker room and beat the shit out of each other. The whole team was like a 24-hour casino.

Anyway, for whatever reason, they all get into arm-wrestling each other and betting on who’s going to win.

This goes on for a while. Glen “Big Baby” Davis becomes the top guy who’s crushing everybody. Even Leon Powe can’t beat him.

At one point Big Baby even messes up Eddie House’s shoulder but the team’s so crazy, nobody cares.”

Imagine hurting a teammate just to win a bet. Anyway, on one flight, KG had had enough of Big Baby’s dominance and challenged him in front of the entire plane which included family members and media members.

“So one night on the flight back from a Toronto game, KG decides he’s gonna challenge Big Baby.

Keep in mind, this is over 10 years ago when media members and families with season tickets were riding on the plane back with the whole team, so the entire plane is watching KG get up and talk shit to Big Baby.

Now, everybody on the team is getting in on the action trying to get money on Big Baby.

Paul Pierce jumps up and says “I’ll do $2K on Big Ticket for anybody who wants in!” Everybody is taking Paul up on it, even Doc Rivers is getting in on the action.

Doc Rivers, the coach of the team and the guy who’s supposed to be in charge, is even getting on the action. This is insanity.

According to Scalabrine, KG had noticed from past arm-wrestling matches that Davis would use his free hand to hold onto the table for leverage. KG laid down the rules before locking arms – no holding the table.

Now they both have their arms locked and it’s on, but KG is like rope-a-doping Big Baby by saying “I ain’t moving! I ain’t moving motherfucker!”

So eventually, Big Baby starts sweating and KG is all “YEAH I GOT YOU NOW YOU BIG A** M*THER F**ER!!!” He eventually wears Baby out and finally KG lets out a primal scream and downs Big Baby.

I mean we all saw where this story was heading. Garnett was going to win by any means necessary. We’re just all reading to find out his overreaction to the situation.

“Everybody on the plane goes crazy. Garnett rips his shirt off and screams “ALL YA’LL M*THERF*CKERS BETTER TAKE NOTICE! I’M THE SILVER BACK GORILLA IN THIS M*THERF*CKER AND DON’T NONE OF YA’LL EVER FORGET IT!!!!!! AAAAAAHHHHHH!!!!”

Paul Pierce is counting all his money up in the air.

The Pilot comes over the intercom and says “Congratulations Kevin Garnett!!!”

There are 7 year old kids on the plane with their season ticket holding parents witnessing all of this.

Listen to the entire interview on The Lowe Post.