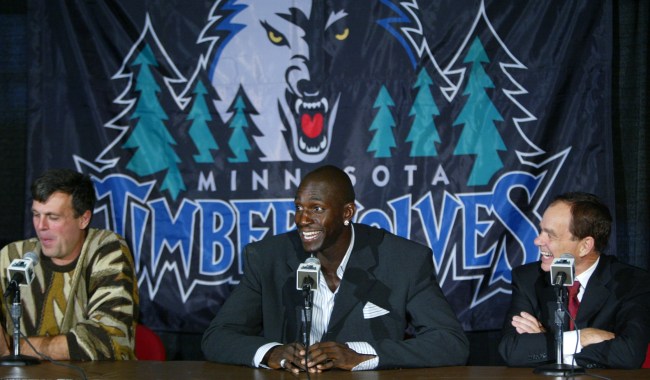 Kevin Garnett and Glen Taylor go together about as well a hairdryer and a bathtub.

Their relationship really soured in the public eye after Flip Saunders, who had promised KG a role within the organization, passed away from Hodgkin’s disease before the 2015-2016 season. Taylor failed to honor that and instead hired Tom Thibodeau on a five-year deal, effectively cutting Garnett out.

Last year, Garnett called Taylor a “snake motherf*cker” and said that he refused to have his number retired by a front office that had Taylor at the helm, the main course to this 2018 appetizer…

Miraculously, Garnett was under the impression that he would be considered to replace Glen Taylor as part-owner of the franchise. That proved to be a pipe dream, according to Garnett’s recent Instagram story.

“Soo just got the news that this process in trying to acquire the TWOLVES IS OVER for me n my group..Thx Glen for being yourself n what I Kno you to be!! GOOD LUCK n aww the best with WHAT WE BUILT. GUESS ITS TIME TO FOCUS ON OTHER PLACES #seattle #vegas…Crazy that some of these special players that helped build these fuxin Franchises like a home but can never own them, only rent them..GTFOH ISHHH A JOKE…Fux em doe…your loss..KEEPING MINE MOVING..AND WE STILL OUT HERE LOOKING!!! STILL GOING…It’s aww possible. Chuck up the Dueces on that azz”

In a bizarre twist, Taylor said in a phone interview that he never heard from Garnett or a group representing Garnett.

“He never called me about that at all ever,” Taylor said. “I was kind of surprised that he didn’t. Then we had about 10 groups or 10 families that made inquiries and stuff like that, and they list who’s going to buy it if they did the purchase and his name was never on anything.”

“If he would’ve called or had been a person who wanted some help, I would’ve tried to help him like anybody else,” Taylor said.