Kevin Garnett Tried To Trash Talk Michael Jordan Once And It Ended Very, Very Badly For Him 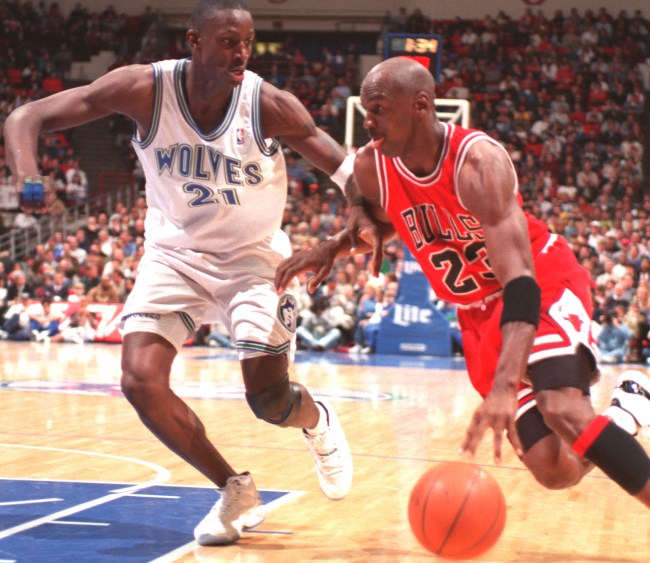 2020 Basketball Hall of Fame finalist Kevin Garnett revealed that during his rookie season with the Minnesota Timberwolves, he once tried to trash talk Michael Jordan during a game against the Chicago Bulls. Garnett ended up paying dearly for his youthful exuberance.

Unlike Tim Duncan, who Garnett revealed this week was sneakily one of the best trash-talkers he ever played against, no one has ever questioned His Airness’ ability to talk smack. That is, except for maybe greenhorn rookies who think they they can step on Superman’s cape and get away with it.

During Garnett’s recent appearance on All The Smoke for All-Star Weekend, the big man from Chicago shared one of his favorite MJ stories.

“We’re in Chicago, it’s my rookie year, second half of the year. You know, how you done caught on now, right?” said Garnett. “Now you got your little one-two movies, you’re gettin’ ’em all, you got some confidence, right? So I’m in that.

“So I hear J.R. go, ‘Alright fellas, yeah, keep going, you too.’ So he’s trying to get me off,” he continued. “I don’t even… now that I recall it he was trying to kind of get off a little bit. So I double back and get ready to say something, and he goes, ‘Hey look, Mike, he don’t even know…” I see him and Mike having a conversation, ‘He don’t even know. He’s excited.’ So now MJ on the back leg joint.

Garnett added that went he went back to bench, completely out of breath from feeling like he’d been on defense forever, he told Rider, “My bad. My bad, yo, I’m sorry, man. I’m sorry.”

When Jordan saw them sitting he walked by and said, “Damn, ya’ll done?”

“Never talked shit to Mike ever agin in life,” Garnett said to close the story.

And check out trailer for the Showtime documentary featuring Garnett that will air this coming fall.