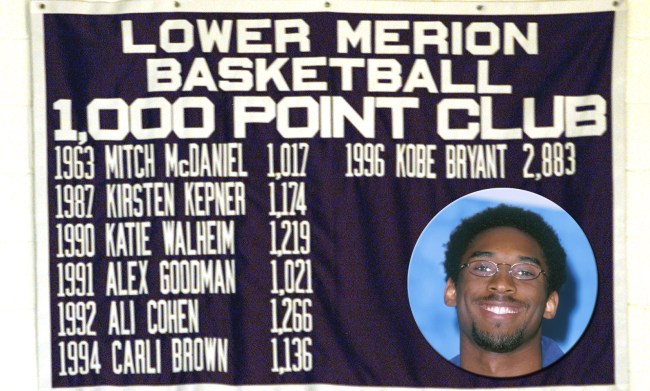 Much like the man he modeled himself after professionally, Michael Jordan, there is no shortage of wild stories about how driven and fiercely competitive Kobe Bryant was during his lengthy and legendary basketball career.

There seems to be no limit to what Bryant would do in an effort to get better, and that drive, according to a story recently shared by Philadelphia native Kevin Hart, who played high school basketball in the city at the same time as Kobe, began way before The Black Mamba reached the NBA.

In the incredible story, Hart shares how while he and Kobe were at the same basketball camp in high school, Bryant played the entire time using just his left hand.

“I show up at the camp. KOBE BRYANT is at the camp,” says Hart. “Kobe Bryant at the time was the number one basketball player in the nation. This is huge. I’m at the same basketball camp as the number one player in the nation. Well, that means I must be number two. I got to be number two. Why else would I be here? It’s my time to shine and get recognized!”

Hart continued, telling a story about how the head coach of LaSalle, where the camp was being held, addressed the campers and used Kobe as an example of someone who was putting in the proper amount of effort.

“Kobe Bryant approached the camp to only work on his left hand,” Hart reveals. “He never shot the ball with his right hand, he never dribbled the ball with his right hand. Kobe Bryant played us left-handed. The opportunity that I thought was gonna be the biggest of my life turned out to be a goddamn practice pad for Kobe Bryant. The moments I thought I was playing some of the hardest defense ever were moments when Kobe Bryant was just counting in his head, ‘One dribble, two dribble, three dribble, four…’

“The man was above and beyond the word good. He was great then. We didn’t even know he was practicing on us until the head coach made us all feel stupid for not working as hard as he worked. Needless to say, that’s when my NBA dreams were shattered.”