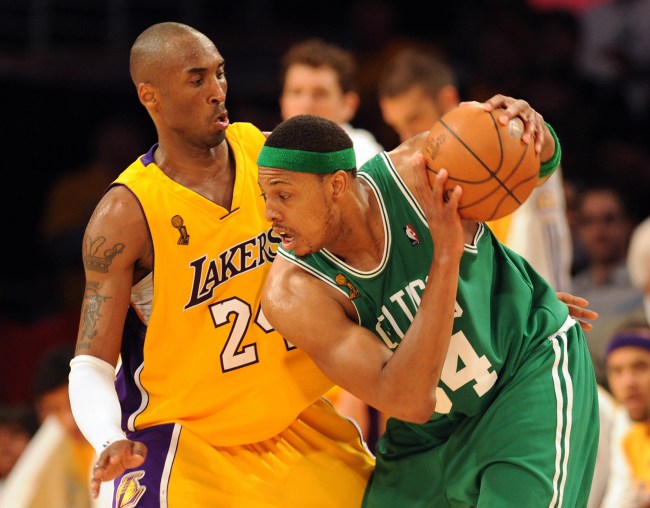 If there’s one thing we all knew about Kobe Bryant during his NBA days, it’s that he was as next level as humanly possible when it came to finding ways to motivate himself. Much like Michael Jordan — who also had that “killer mentality” that only the greatest athletes seem to exhibit — Bryant was obsessed with winning. In fact, he probably hated losing more than he loved the thrill of winning.

Although Bryant walked away with five NBA titles during his illustrious career with the Los Angeles Lakers, one of his two losses in the NBA Finals came in 2008 against the Boston Celtics, where another superstar in his prime at the time, Paul Pierce, gave fans a memorable performance that’ll forever go down in history. It’s why Pierce, not Bryant, walked away with Finals MVP that series — which clearly didn’t sit well with Kobe Bryant.

In classic Kobe style, the Lakers star wasn’t going to forget about that feeling, and he actually cut out a newspaper clip with Pierce on the front page to put in his pocket as a reminder. Using the image as motivation to push himself during the summer, Bryant pulled the stunt in front of a bunch of U.S. basketball players during the 2008 Summer Olympics, with women’s baller Sue Bird briefly describing the story on Twitter.

“The 2008 Olympics were right after he (Kobe) and the Lakers had gotten beat by the Celtics. He was fresh off of that; and you could just tell.

“So one night we were all just hanging out, playing some cards, drinking some wine; you know, just kickin’ it, you know? And he like saw this newspaper… with a picture of Paul Pierce celebrating.

“He didn’t say a word. He didn’t say anything. But we saw him take the paper, he started cutting out the Paul Pierce picture, he folded it up, he put it in his pocket. And he was like, ‘motivation.’

“And we were like, ‘Ohhhhh.’ It never stops with him. You could just tell.”

Yep, that’s just about what you’d expect from Kobe Bryant, right? It’s only part of his legacy, and one of the reasons why he was so successful at everything he did — both on and off the basketball court. Even amongst his peers at the time, which included the best men’s and women’s basketball players on the planet, Bryant was proving how different his competitive spirit was.

Here’s the thing that makes this story even better, though: Bryant copped revenge the next two years, winning back-to-back NBA titles in 2009 against the Orlando Magic, and then again in 2010 against Pierce’s Celtics. So, while the story from Bird itself is pretty cool, that he actually followed through on his promise to himself by using the newspaper image as motivation is straight up iconic.