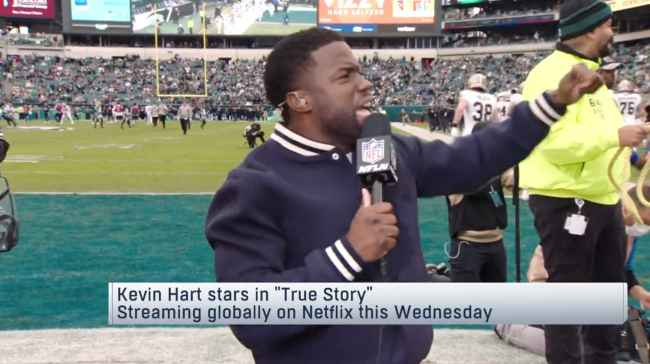 Kevin Hart was born and raised in Philadelphia and never fails to rep his city. The 42-year-old comedian joined NFL Network on Sunday morning and hilariously interrupted his promo to show out for the City of Brotherly Love.

Later this week, on Wednesday, Hart’s new TV show ‘True Story’ is set to hit Netflix. It is a drama series that is seemingly inspired by himself.

“A tour stop becomes a matter of life and death for a famous comic when the fallout from a night with his brother threatens to destroy everything he’s built.”

Hart, a huge Eagles fan, was mid-promo as Philadelphia’s opponent, the Saints, took the field. Without hesitation, as the New Orleans players ran onto the field just feet from his live hit, Hart stopped mid-sentence to ferociously boo them.

.@KevinHart4real really stopped mid-promo to boo the Saints as they ran on the field 🤣 pic.twitter.com/JuQS1dDNG4

Hart is a huge Eagles fan and has been since birth. After the team won Super Bowl 52 in 2018, Hart was visibly intoxicated. He tried to finesse his way onto the celebration podium. Although he was unsuccessful, but his post-incident stories of that night are incredible.

Sunday’s appearance was quite a bit more tame, but it was equally as hilarious. Very few people are funnier in real life than Hart, especially when his football team is involved.