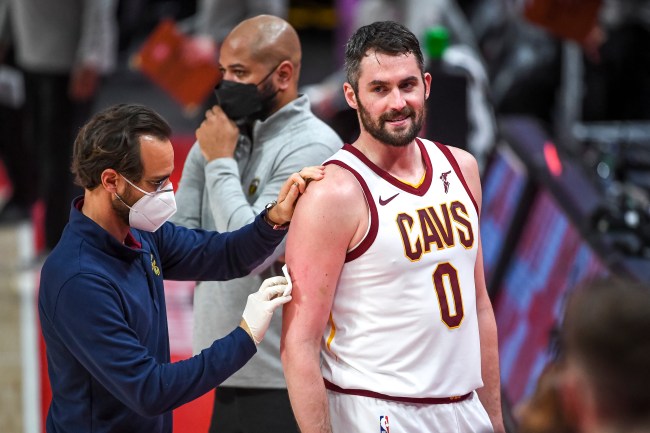 Kevin Love, a man who is currently playing out a 4-year, $120 million contract ($31 million this season alone), has played 18 games this season and after last night’s hissy fit, no one would be surprise if he puts in for overtime on his time sheet.

Love committed the most egregious turnovers you’ll see in a professional game in the Cavaliers’ 112-96 loss to the Toronto Raptors on Monday night. Love went to inbound the ball with 40 seconds left in the third quarter while the Cavaliers were down six points.

That changed quickly after Love gifted Toronto with the easiest three points they’ll receive all season.

Love did not play the rest of the game after the breakdown 11 points and seven rebounds, leaving the court before the final buzzer sounded.

The breadcrumbs were there. From just days ago:

Kevin Love wanted no part of this Miles Bridges slam. 😅

It’s not unreasonable to be frustrated that your squad has lost 8 of 10 and will miss the postseason for the third straight year, but it’s also not unreasonable to assume that if your highest paid player is averaging 11 points and playing in less than a third of the games, you’re probably going to be doo doo.

Love hasn’t yet responded to the incident, but coach J.B. Bickerstaff gave the media a canned answer to a very big internal problem.

“You’ll have to ask Kevin,” Bickerstaff said of the incident after the game, via Cleveland.com. “We talked about it. He apologized to his teammates for it and we’ll move on.”

If there’s a silver lining in this, it’s that it provided fertile ground for highly-entertaining content.

Reporter: “why did you inbound the ball like that?”

Kevin love trying to get into the cavs facility tomorrow to go through the motions of another practice pic.twitter.com/1ooJTXsVV8

Kevin Love should be fined for that mess!!!! That’s not earning a paycheck!!!!!

Anyone trying to defend Kevin Love this morning pic.twitter.com/gO4hBOoJcS