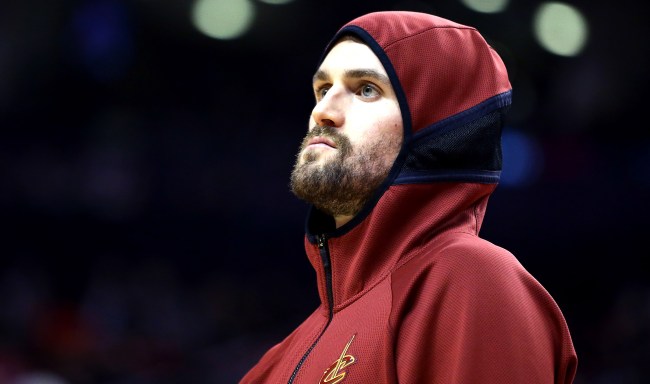 Kyrie Irving somehow came to the decision that he wouldn’t be speaking with the media during the upcoming NBA season. In a statement he released, Irving explained that “life hit differently” so it requires him to “move differently” this season, whatever that means, and he’s going to “let his game on and off the court speak for itself.”

This is the same Kyrie Irving that said the Earth was flat and he came to that conclusion by doing research on Instagram.

Irving knows that part of his job as an NBA player is to speak with the media. The league has rules that players must meet when it comes to media obligations, but Irving clearly doesn’t care about them. Remember, “life hit different” this year. After Irving didn’t fulfill a media obligation earlier this week, the NBA slapped him with a $25k fine in which the point guard responded to by posting a Malcolm X quote to his Instagram account referring to the media as “pawns.”

It’s abundantly clear that Irving doesn’t trust the media, in fact, he hates the media. But again, there are rules in the NBA and instead of abiding by them, while cashing a $33 million a year paycheck from the Nets, Irving is deciding to act like a child instead of a 28-year-old man who is paid to play basketball and, again, interact with the media.

Irving’s Malcolm X quote and his calling media members “pawns” caught the attention of the entire NBA world on Friday including former teammate Kevin Love who said it was disrespectful for Irving to make a comment like that.

#Cavs Kevin Love disagrees with former teammate Kyrie Irving’s stance on the media.
“Calling anybody a pawn is a sure sign of disrespect,” Love said. “I’m not a divisive person.” pic.twitter.com/4izgXgnO1A

Love referring to Irving’s comments as divisive is spot-on. Everyone knows that the media can spin things, but Irving still has an obligation to at least answer the most basic of questions the media asks throughout the year. We’re talking about sports media here, too, we’re not talking about political media where every sentence uttered is dissected, spun, and blasted into certain circles. Irving is an NBA point guard, one of the best in the league, but that doesn’t let him off the hook for not speaking with the media.

Irving’s job is to play basketball then after he plays basketball speak with the media so it can give insight to fans about said basketball game. That’s it, that’s his job description, and he can’t fill those requirements, apparently.