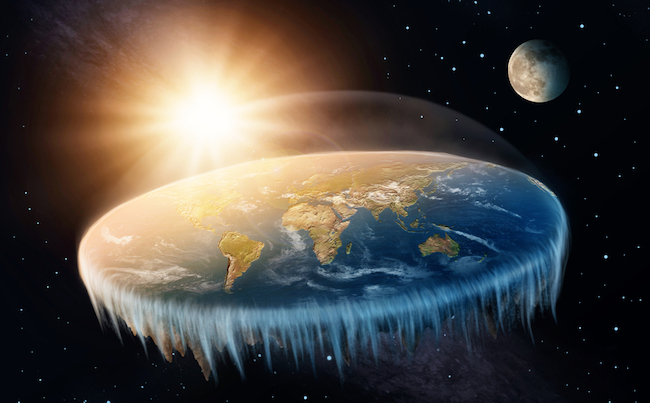 Kyrie Irving made some waves last year when he announced he believed the Earth is actually flat because Kyrie Irving is as good at basketball as he is awful at believing well-established facts. He managed to avoid being on the receiving end of a smackdown from celebrity astronomer (and notable buzzkill) Neil Degrasse Tyson like fellow Flat Earther B.o.B, but that doesn’t mean he was shit on by basically everyone else.

Irving eventually tried to suggest the people who believed him were the real idiots for not knowing he was trolling everyone (and even poked fun at himself in a recent commercial), convincing close to no one in the process.

I previously compared Irving to that kid in high school who got waaaaay to into the totally credible “documentary” Loose Change, but it turns out that statement was way more accurate than I ever could have imagined. During Irving’s recent appearance on J. J. Redick’s podcast, the two kicked off the show by talking about various conspiracies, and the Celtic said his third eye was opened thanks to the world’s most credible and academic source: Instagram.

Here’s his explanation if you can’t watch the video:

BREAKING: Kyrie Irving, on JJ Redick’s podcast, reveals that his flat-Earth theory came from his dutiful research on … Instagram.https://t.co/YeeSygcGFr pic.twitter.com/4r9qK8lmnD

The two also discussed whether dinosaurs actually ever existed— Redick apparently agrees with Irving’s theory that they didn’t— and things eventually went off the rails and plummeted into a river when Redick started questioning whether or not 9/11 was actually an inside job perpetrated by “everyone who has basically controlled us.”

I’d like to formally congratulate J.J. Redick on doing what I previously thought was impossible by somehow managing to make Kyrie Irving look like a sane and rational being.