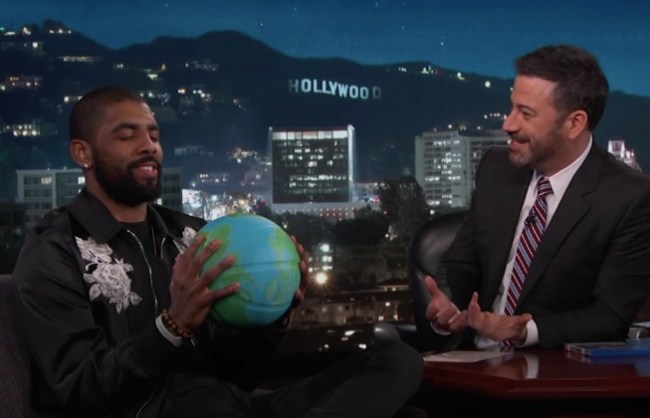 Kyrie Irving is playing on Team LeBron in the 2018 NBA All-Star Game in Los Angeles, the biggest party in America this weekend. Kyrie’s been a member of the Boston Celtics roster all season long after playing with ‘Bron in Cleveland for several years, so this weekend marks the first time that they’ll be reunited on the same roster since Kyrie got traded.

As a guest on Jimmy Kimmel Live last night, Kyrie talked about what order he thinks LeBron James picked him for ‘Team LeBron’ in the NBA All-Star Game. It’s Team LeBron vs Team Curry, with each captain choosing his team. Jimmy Kimmel makes a point of telling Kyrie that Kevin Durant believes he was picked first. And this presents a very unique scenario. Throughout these athlete’s entire lives they’ve never been picked 2nd in anything (other than the NBA Draft), so it’s odd for them to wonder where they’re being picked for a team in the All-Star Game.

You almost have to feel bad for Kyrie Irving when it comes to that Flat Earth stuff. The dude said some stupid shit years ago that he’s since clarified (spoiler alert: he doesn’t think the earth is flat). But those comments have chased him into nearly every interview he’s done since that day he said the earth is flat.

Kyrie seems like a very intelligent guy. It has to drive him insane that everywhere he goes he’s forced to clarify the single stupid thing he said in the past no matter how much time elapses. I know that’d drive me insane if I was in his shoes.