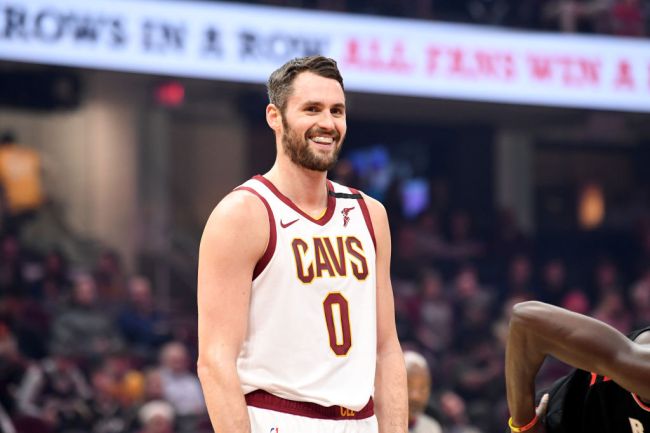 The Denver Nuggets played host to the Cleveland Cavaliers on Monday night and things got heated between Cleveland’s Ricky Rubio and Denver’s Facundo Campazzo.

Neither Campazzo nor Rubio are known as being players to get into in-game altercations, but Rubio simply couldn’t help himself after Campazzo closed him out defensively.

Campazzo quickly closed in on Rubio in the corner and Rubio thought that Campuzzo intentionally kicked out his leg to bump him. After seeing the replay, you could certainly make the argument that Campazzo did in fact open his leg up a bit.

Rubio and Campazzo then butted heads before anyone stepped in to break the two apart.

Frustrations flare up between Ricky Rubio and Facundo Campazzo.#LetEmKnow pic.twitter.com/8w8sjKavwt

After the Cavs’ 99-87 win, Kevin Love was asked about the altercation between his teammate and Campazzo and gave the perfect reaction. Let’s just say he wasn’t too worried about things turning ugly between the two players, even if fists were to fly.

#Cavs Kevin Love on the Ricky Rubio-Facundo Campazzo dustup: "That was funny, that would’ve been one of the worst fights I’ve ever seen in my life"

The big takeaway, besides Love clowning on his own teammate, was that Campazzo’s play did seem to be on the dirty side. It’ll be interesting to see if anything else comes of this when the two teams meet up again later this season.

The scuffle between the two players was about the only thing Rubio and Campazzo did in the game. Rubio finished the night with just seven points, while his foe managed to score only three points. The two were a combined 3-for-14 from the field.