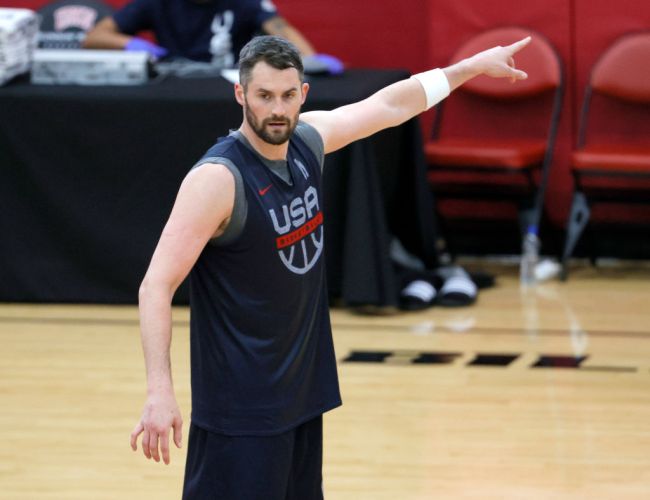 When Team USA’s Olympic basketball roster included Kevin Love, the internet imploded. Jalen Rose falsely claimed that the U.S. was “scared” to send an all-black team and sports media threw out all kinds of outlandish takes.

Rose later apologized and Team USA released a statement on the decision to choose Love over some other, seemingly more qualified, candidates.

No matter the reasoning, seeing Love’s name on the roster was a bit strange. He averaged just 12 points per game in only 25 games last season.

Team USA cited Love’s international experience and a lack of bigs, which actually makes some sense. Regardless of reason, the damage was done and people were FURIOUS.

Love, who turns 33 in September, heard the pushback and has used it as motivation.

“In a way I understand [the criticism] because I came off a season where I didn’t play that many games and wasn’t at the top of my game,” Love said after the team’s first practice on Tuesday. “For me to come here, I feel I have a lot to prove.”

To say that Love has a lot to prove is an understatement. The 13-year NBA veteran wants out of Cleveland and the team is willing to trade him.

The Cleveland Cavaliers will try to move Kevin Love in a trade this summer, per @AmicoHoops

However, nagging injuries (has has played only 103 games in three years) and poor play have kept him on the Cavaliers. His two years and $60 million remaining on his contract doesn’t help either.

If Love can figure out his play in Tokyo, his value as a role player could be coveted by a team needing depth for a championship run. If he can’t, he will likely be stuck spending the next 24 months in Ohio with retirement all but imminent.

Team USA head coach Gregg Popovich was the one who made the call and offered Love the roster spot. He believes that the 6-foot-8 forward fits well against some of the veteran European teams at the Olympics.

Specifically, Pop likes Love’s ability to shoot and fight for rebounds. That doesn’t mean that he is getting special treatment.

In fact, Love has his work cut out for him.

“We’re going to work his ass off the next four to five weeks and demand a lot,” Popovich said. “That’s going to definitely get him back into the rhythm he needs to be in to continue to play. I think that’s one of the big reasons he wanted to do this, so he can get himself back to who he was.”

Showing out at the showcase.

The United States has an incredibly deep roster, so it is unclear how much playing time will be allotted to the five-time All-Star. Love will split time with Bam Adebayo, Kevin Durant, Jerami Grant, Draymond Green, Khris Middleton and Jayson Tatum.

Whether he plays significant minutes in Tokyo or not, the next few weeks is essentially a showcase for Love. He just has to silence the doubters and work hard.

“I’m 13 years in now, I’ve heard it all,” Love said. “All I can do is go out there and chase the game, let everything fall into place and just bust my ass and see what I can do for this team.”

“I do believe if it’s on me to have to pivot in my career for a team to win, I’m more than willing to do that. I do feel like on [the Cavs] or whatever team I end up on or USA team, this is definitely something I can continue to progress in.”

Love and Team USA will play five exhibition games before the Olympics. NBA executives will be in attendance, watching Love with significant scrutiny.