Cavs’ Kevin Porter Jr. Reportedly Threw A Tirade In Front Of Entire Team After His Locker Was Moved 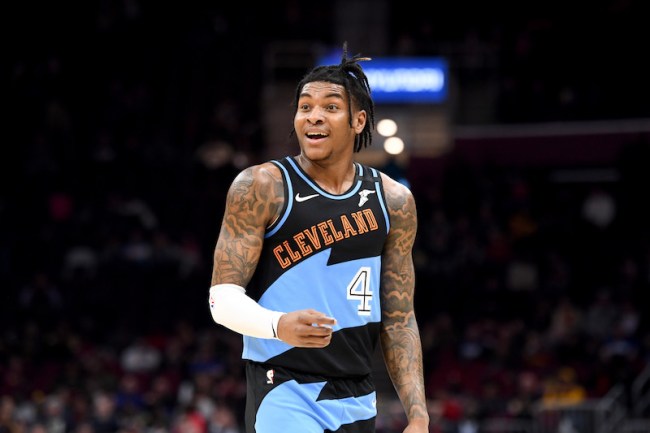 As a Cavs fan, I was beyond stoked when the team picked Kevin Porter Jr. 30th overall in the 2019 NBA Draft, as the former USC Trojan and five-star recruit had serious athleticism and a freakish ability to score — something my squad desperately needed during this miserable rebuilding process. Problem was, Porter Jr. had some off-the-floor issues, which led many teams to overlook him leading up to the draft. But when you’re a bad team who needs talent, you take a flier on a guy like this when he slips down draft boards because of personal issues, hoping you can develop him and teach him some maturity.

Fast-forward 18 months or so, and the decision by the Cleveland Cavs to add Kevin Porter Jr. to its roster has officially backfired. Not only did the 20-year-old get busted last November for improper handling of a firearm in a car, but he was also charged with possession of marijuana and driving without a license. All charges were dropped, but it was clearly a bad look for the second-year player.

Due to those off-the-court issues, Porter Jr. had yet to play in a game for the Cavs. After his latest issue, it doesn’t look like he’ll ever suit up for the franchise again.

According to The Athletic, Kevin Porter Jr. is expected to be traded or released after a serious outburst in the Cavs locker room Friday night. The report states that Porter Jr. was upset that his locker had been moved — with his old locker given to newly acquired Taurean Prince — and that led to shouting at coaches, the general manager and even throwing food.

Porter, 20, who has not played this season due to personal issues, grew angry when he entered the locker room and realized the team gave his old locker to Taurean Prince, who was acquired in a blockbuster trade Wednesday. Porter, whose locker was moved to the wall where the younger, end-of-bench players reside, began yelling and at one point threw food.

General manager Koby Altman came into the locker room and confronted Porter, and the player remained combative with his boss. The Cavs spent the weekend trying to trade him. Coach J.B. Bickerstaff heard the commotion in the locker room from his office and came in, shocked and disgusted by what he heard.

This is every team’s fear when drafting a talented (but immature) player like Kevin Porter Jr. The guy showed plenty of promise in the court — and was believed to be a cornerstone for the Cavs in the next few years — but one ugly incident like this may completely derail his NBA career. If a bottom-feeder like Cleveland cuts ties with him, what franchise really thinks he’s worth adding to their roster now?

As for the whole moving the locker thing, does anybody know if this is common practice? Like, do NBA teams often do this if a guy is inactive (as Porter Jr. was all this season), or was it just something the Cavs did to make a point? I honestly don’t know, and my buddies and I are searching for answers.

Regardless of this being routine or not, the fact that Kevin Porter Jr. reacted as he did proves he doesn’t have the maturity to be a pro hoops player right now. He needs some help to try and get another shot, because he’s got tons of talent that’s just getting wasted because of dumb decisions like this.