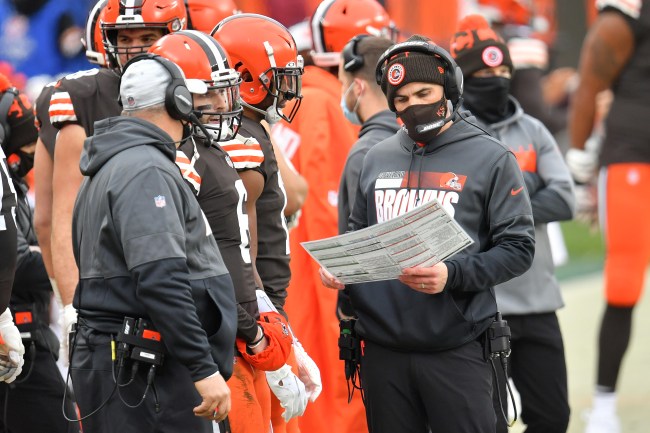 Imagine being Kevin Stefanski this morning after seeing his Cleveland Browns win the franchise’s first playoff game since 1995. Sure, the 38-year-old’s no doubt ecstatic, but because he was forced to miss the team’s contest against the Steelers after he tested positive for COVID last week, there has to be a little bit of sadness, too. Then again, it’s onto the Kansas City Chiefs now, so there’s no time to worry about the blowout victory over Pittsburgh anymore.

Forced to watch the Browns-Steelers game on TV from his basement alone, Stefanski didn’t exactly get to cherish his first moment as a head coach in the NFL Playoffs. I’m sure he played out in his head how that feeling would be — with his players amped up, fans going crazy, and the nerves running through his veins. Obviously, given this strange NFL season, it was the exact opposite, with Stefanski unable to take part in the atmosphere. Luckily, his players won, so the first-year head coach gets his chance to experience things for himself in the Divisional Round.

While everything seemed to go right for the Browns against the Steelers on Sunday night — with the team getting up 28-0 in the first quarter — Kevin Stefanski wasn’t so lucky. Forget the fact he wasn’t on the sideline with his team, how about the fact that he missed the game’s first touchdown in real time because his basement’s TV was delayed. No, seriously.

Check out what the coach had to say Monday morning about the little technical difficulty, where he thinks be paused the channel and never actually hit fast-forward to catch up. Classic fail, coach.

#Browns Stefanski talks about his reaction to the first play of the game that resulted in a Browns TD. pic.twitter.com/dRR4xl7Al5

#Browns coach Kevin Stefanski said when he was in basement, he must have hit pause on TV or something b/c it was delayed at start of game, and he heard his kids go crazy upstairs when the snap went over Ben Roethlisberger's head, so he knew something good happened when he heard

OK, be honest, how many sports fans have had to live through something like this themselves? It happened to me a few years ago when my phone blew up after the Ohio State-Michigan game in 2016 and my TV was delayed like Kevin Stefanski’s was during the NFL Playoffs. It sucked, and took out all the drama of watching it myself. But, on a positive note, it did lead me to make a change: Turn my phone over during games and only check it during commercial breaks, just in case.

The good news for Stefanski in this situation was that his family was cheering and celebrating, not booing and screaming at the TV upstairs in anger. Still, what a wild bunch of emotions the coach had to be going through while hearing it all.

Here’s to hoping Kevin Stefanski and most of his Cleveland Browns players get healthy and ready for the Chiefs in the next round of the NFL Playoffs, because it’s been a wild NFL season for the team that nobody really expected. And, should the coach get back to full strength, the atmosphere on the road is sure to be way different than what he experienced during the team’s opening postseason contest.