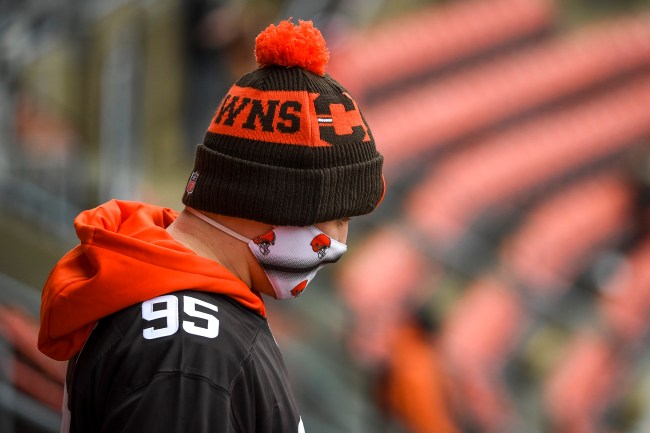 The NFL Playoffs start this weekend, and, as a diehard Cleveland Browns fan, I’ve been waiting 18 years for this franchise to get back to the postseason. The last time I witnessed the team in this position? It was half of my lifetime ago when I was a junior in high school. I was probably failing Geometry or something. I was driving a 1997 Jeep Cherokee. I was praying my Cleveland Cavs sucked bad enough to draft LeBron James in the upcoming 2003 NBA Draft.

Obviously, the entire experience of the Browns in the 2002 NFL Playoffs was… not great.

The team got up big. They letdown their guard. They squandered a 17-point lead and ended up losing to the Pittsburgh Steelers. Yeah, the same Pittsburgh Steelers franchise that Cleveland plays in the NFL Playoffs this season. So this upcoming game means a lot to all my fellow Dawg Pound members.

Problem is, the Brownies have had some seriously bad luck at the absolute worst time dealing with COVID. In the past 15 days, the team basically saw their entire wide receiver room wiped out by the virus. They’ve seen head coach Kevin Stefanski test positive, and their Pro Bowl guard do the same. The latter two won’t be available for the Steelers game this weekend — and it’s time for the league to step in and reschedule the Wild Card contest. It won’t, though.

After speaking to a #Browns source, the belief is that the #NFL won't adjust the date of this game unless additional players test positive deep into the week. Which is possible. But I get the sense this would have to be a #Ravens-type spread by Friday for the game to get pushed.

Yep, the NFL is going to ruin this. They’re going to cost the Browns any chance of winning. They’re going to add to the misery of being a Cleveland sports fan, with “The COVID Game” joining “The Drive,” “The Fumble,” “The Shot,” and “The Decision,” in the lore of depressing sports moments for the city.

Prior to the NFL season kicking off, I wrote about how the league would adapt and, potentially, push back the NFL Playoffs and even the Super Bowl should COVID rage on and impact a team. Well, here we are, NFL, because the Browns officially are being impacted by this damn thing, so it’s time to do the right thing and put the game on pause until further notice. Like, if one of the Super Bowl teams were without its head coach, don’t you think the league would reschedule? Hope so.

Just look at the laundry list of Cleveland players and/or coaches who are currently on the COVID list leading up to the Browns-Steelers game.

If the NFL really is “waiting” for a “Ravens-type spread” to hit Cleveland, what’s it going to take? Would the team’s starting quarterback, Baker Mayfield, be the final straw? How about one (or both) of the team’s Pro Bowl running backs? Or maybe the entire defensive line needs to be wiped out? Would that do the trick?

The Browns-Steelers game, as it currently stands, is like Cupcake U marching into “The Shoe” to take on the Ohio State Buckeyes. Cleveland stands zero chance of winning.

Forget miracle upsets. Hold any optimism. It’s over — and everybody knows it before the game even kicks off.

It’s time for the league to step in and do what it promised months ago before the season started and reschedule the NFL Playoffs right now. These aren’t injuries the Browns are dealing with, they’re positive cases of a virus that, by protocol, could allow coaches and players to return if the contest is pushed back a week. Save yourselves the embarrassment and do it, NFL.

Cleveland Browns fans have suffered enough over the past 18 years. We’ve endured a helluva lot of bad. Now that we finally get back to the NFL Playoffs, the league’s going to fail us. Call me a whiner if you want to, but the Dawg Pound — and all football fans — deserve better than this.