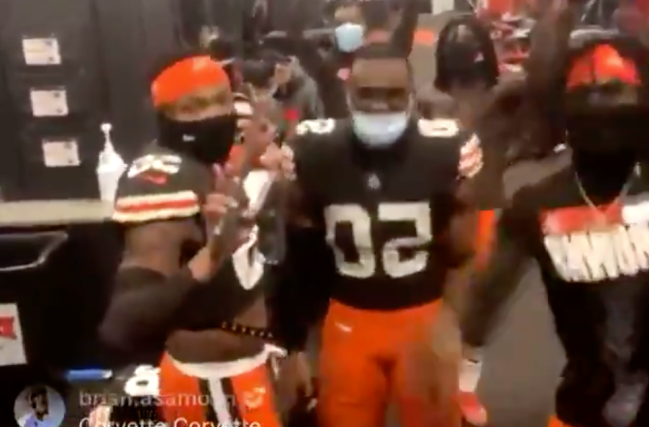 The Cleveland Browns snapped their 18-year playoff drought with a 24-22 win over the Steelers on Sunday. Baker Mayfield completed 17 passes for 196 yards and Nick Chubb rushed for 108 yards and a touchdown on 14 carries, but it was the defense that proved the difference in the end. Linebacker Mack Wilson went live on Instagram after the game and showed a bunch of his teammates dancing to Adderall by Pop Hunna. More well-known as it’s alternate title “Corvette Corvette,” it has gone viral for its corresponding dance on TikTok over the past few months. Of those who got in on the sensation was Pittsburgh wide receiver JuJu Smith-Schuester, who did the choreography prior to a handful of his team’s games on the midfield logo at away games.

He did it first in Dallas.

Walk In & Take Over Your Trap #steelers #fyp #cowboys

And last in Cincinnati.

Opposing teams cited the pregame dances as motivation fuel and he stopped after the Steelers lost three consecutive games. However, he and his teammates got back on the app for a postgame celebration after clinching the AFC South in Week 16. With the top seed in the division locked up, head coach Mike Tomlin decided to rest quarterback Ben Rothlisberger and a handful of starters against the Browns on Sunday. Despite the Mason Rudolph-led adversary, the game went down to the wire and nearly swung the other way down the stretch. Nonetheless, Cleveland clinched its first playoff appearance since the 2002 season and did some dancing of its own to celebrate. The song choice was a clear shot at Smith-Schuester, who recorded six catches for 65 yards and a touchdown.

Both teams will play in a Wild Card game this weekend and as the schedule played out, it set Pittsburgh and Cleveland up for a rematch at 8:20 p.m. on Sunday from Heinz Field. This has been one of the more visceral rivalries in the NFL in the past and it reached its peak last season when Rudolph and Myles Garrett brawled. They have since squashed the beef, but the bad blood between the two teams is clearly still looming, based on the locker room dance party.