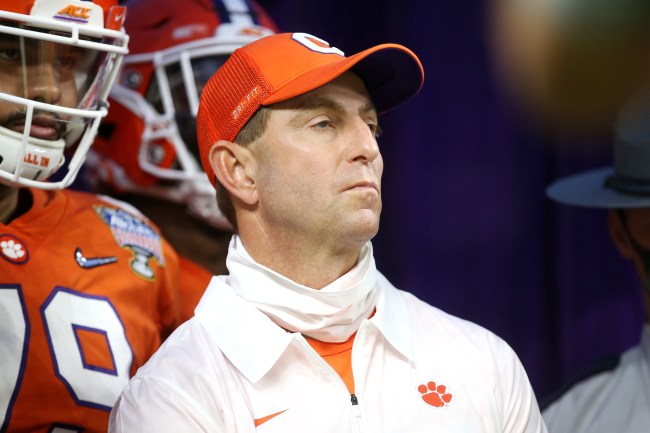 Before the Clemson-Ohio State College Football Playoff semifinal, Tigers head coach Dabo Swinney raised eyebrows when he ranked the Ohio State Buckeyes No. 11 in his Coaches; Poll. Swinney argued that OSU should have been disqualified from being ranked in the top 10 because they only played six games due to Covid-19.

Should a team playing half a normal college football season be eligible for the #CFBPlayoff?

Swinney doubled down on his stance after receiving backlash over his ranking of Ohio State.

“It means something to me. It’s my poll. I do it. … It has nothing to do with Ohio State — absolutely zero,” Swinney said. “You can change the name to Michigan or Georgia or Florida or Tennessee or Nebraska. Anytime you have a top-10 (ranking), it should be that special. This year it’s like really, really, really special and I wanted it to be that way.

“Obviously, they’re a great team. They’re plenty good enough and talented enough to beat us and good enough to win the national championship. But, in my opinion, I don’t think that it’s right that 3 teams have to play 13 games to win it all and 1 team has to play 8. What universe am I living in? And it has nothing to do with them. It was about qualifying. And I didn’t think they were qualified based on the number of games.”

Clemson went on to get blown out by Ohio State on Friday night in the Sugar Bowl and fans immediately reminded Swinney about his comments.

I’m looking forward to seeing what Dabo answer is when they ask him if he still think @OhioStateFB is the 11th best team in the country.

DABO GETTING ROLLED BY THE NATION’S 11TH BEST TEAM.

“Dabo, now that your team just got whooped by Ohio State. What’re your thoughts about ranking them 11th?”

Dabo Swinney explaining to the media why he lost to the “11th ranked team” pic.twitter.com/Dkdy9F0sW5

“Here live with Clemson’s coach. Coach, your thoughts on getting blown out after ranking Ohio State No. 11” pic.twitter.com/KStFyZW8f3