Khabib, His Manager, Conor McGregor, And Paulie Malignaggi Are All Still Talking A Massive Amount Of Sh*t 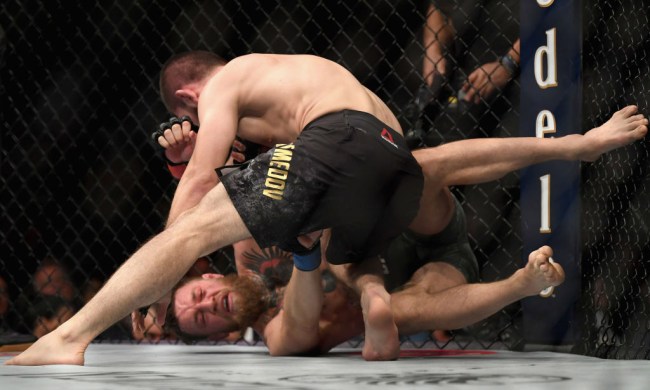 Conor McGregor can’t seem to let go of his loss to Khabib Nurmagomedov at UFC 229.

McGregor’s former sparring partner Paulie Malignaggi also can’t let go of the way he feels he was treated by McGregor while training for Conor’s fight with Floyd Mayweather.

And somehow, thanks to the former, the latter is now once again involved in a war of words that quite frankly, keeps getting won by Khabib and his team.

McGregor especially can’t get over the fact that people believe he told Khabib in the octagon that all of his pre-fight bluster was “just business.”

Over the weekend, just to drive that point home, McGregor posted a video of his former sparring partner, and made a not-so-subtle reference to the “just business” comments by claiming that what he really said in round three was, “Don’t be a b*tch, b*tching.”

“Let the record show. I like Paulie Malinaggi,” McGregor wrote alongside a video of a confrontation he and Malinaggi engaged in recently. “Here is a confrontation between us regarding a picture he was upset about. Yes you heard that right. A picture.

“I told him here to his face. ‘Don’t be bitching.’ Common knowledge I would think for a fighting man. Don’t be a bitch, bitching. The same thing I said to khabib at the end of round 3. My round. Don’t be bitching! Every single round bitching to the referee. He was even bitching in the fourth round from mount position. It baffled me.

“Many individuals in the fight business, I have learned lately, are absolute bitches. I know you’s are broke boys. But don’t be broke bitches.”

Naturally, Malignaggi and Khabib both had to respond.

“For a guy that posts about bitch or bitchin an awful lot, its seems this guy doesn’t have a proper understanding of what the word means,” Malignaggi wrote on Instagram with a video of the infamous “just business” comments. “So I found a recent clip of him exemplifying its definition in one cowardly act. “Let the record show” that I do like Conor McGregor, everyone loves a piñata and him being combat sports official piñata theres plenty of entertainment there. I give him credit though. For a guy with absolutely NO BALLS, the woof tickets he sold to all you stupid motherfuckers in recent years is amazing. Hes got a great talent for being a great bullshit artist. U can be rich, but you def a bitch you cokehead lush. So don’t let that shit you ingested on your Friday night cloud your memory of reality.”

Oh yeah, Khabib’s manager Ali Abdelaziz, who McGregor denigrated in the leadup to UFC 229, also got in on the fun, writing in a since-deleted Instagram post, “Conor McGregor. Seriously dude stop embarrassing yourself, your family and your country.”

“You talk sh*t about a man who made you f**king quit, made you give up and after the 3rd round,” he continued, according to The Sun.

“You told him it was only business and now you says he’s a b*tch. “You’re the number 1 b*tch in MMA you are the biggest prostitute the sport has ever seen.

“After Khabib Nurmagomedov beat your a** you should shut up, get back in the gym and climb your way up the ladder.”

Khabib, however, wasn’t being so talkative, preferring to let a picture do most of the work for him…

“You will live with this shame all your life, bi… #tapmachine #mactaper,” wrote Khabib.

Another W for Khabib.