Khabib Nurmagomedov Mocks McGregor Again, Reiterates He Wants To Fight Mayweather Next, Not In The UFC 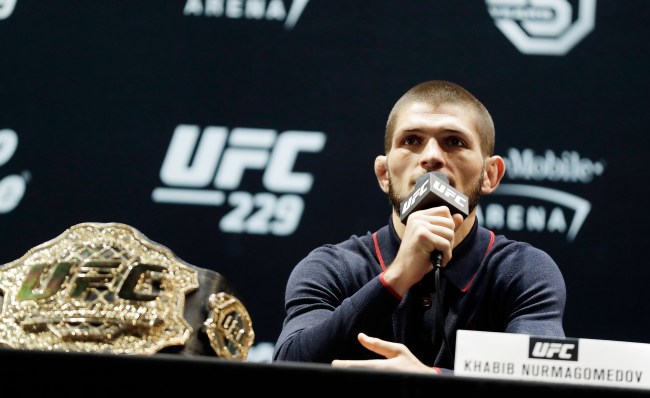 Ever since Conor McGregor opened Pandora’s box by becoming the first current UFC fighter to take on a boxer in the ring, Floyd Mayweather, and become filthy rich in the process, UFC’s top dogs have been looking to score a payday as big as “The Notorious One” received.

Of course, since he’s all about the money, Floyd Mayweather has done nothing to dissuade any challengers, be they a Japanese kickboxer or current UFC lightweight champion Khabib Nurmagomedov.

In fact, the prospect of such a payday has gotten so deep into Nurmagomedov’s head that he reiterated on Monday at a press conference in Moscow that he wants his next fight not to take place in the octagon for the UFC, but in a boxing ring with Floyd Mayweather.

The UFC champ spoke with reporters for almost an HOUR at a press conference in Moscow on Monday and explained why he’s dead serious about getting a shot with Floyd.

“Frankly, I think money-wise, and competition-wise, the bout against Mayweather would be much more interesting [than a UFC fight against Tony Ferguson].”

Khabib admitted some people on his own training team don’t think he has a shot to beat Floyd in a boxing match — “Well, this motivates me.”

Speaking of the guy who got this whole thing rolling, Conor McGregor, Khabib confirmed during the presser that McGregor did tell him inside the octagon that all of his bluster was “just business” as he Conor was taking a mean beating from the Russian.

Nurmagomedov also said he hasn’t spoken to McGregor since defeating him at UFC 229, “Maybe he forgot his tongue at home.”

Other topics covered included whether there could ever be a reconciliation with Conor and his thoughts about his climbing out of the octagon to fight McGregor’s team in the crowd.

Watch the entire press conference below…