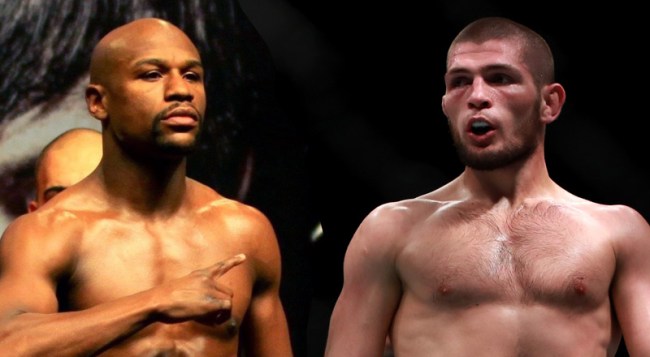 It looks like, despite how much he appears to loathe the man, Khabib Nurmagomedov is still willing to take a page out of Conor McGregor’s book of hype.

On Tuesday, McGregor took to Instagram to make a lengthy statement breaking down his devastating loss to Khabib. And now, Nurmagomedov is also using the social media platform to hype up a potential fight with 41-year-old boxing champion Floyd Mayweather.

Writing on Instagram, Khabib said (as translated by Google), “A meeting with the Secretary General of the Russian Boxing Federation @umar_kremlev was held today. We discussed the fight with Mayweather. We want the fight to take place in Moscow at the legendary Luzhniki arena. They are sure that we will gather 100 thousand spectators, and also set a world record for the sale of paid broadcasts. And, most importantly, my father will be in the corner; a visa to Moscow is not needed. And so a question for my fans: do you believe in me? Or do you also think that he will knock me out of boxing?”

Whether he is serious or not, there would definitely be a humongous payday should he lock horns with Mayweather in Moscow. Khabib’s manager has said that the fighter would need at least $25 million to defect from the UFC. That is a financial goal that is not completely out of the question.

For his part, Mayweather has been very vocal that the fight between him and Nurmagomedov is going to happen, telling TMZ, “Oh we fighting. I’m my own boss. I can’t say what’s going on on Khabib’s end, but on my end we can make it happen.” He also said he expects a 9-figure payday from the fight.

Current UFC welterweight champion, Tyron Woodley, says he spoke with Mayweather and he believes that there’s a 70% chance the fight takes place.

“Don’t pay attention to it,” White told ESPN last week. “First of all, the Mayweather team has not approached us at all. Khabib is under contract with the UFC. Floyd is very good about getting his name out there when he wants to.”

In other related news, the Nevada State Athletic Commission finally gave Khabib some of his money.