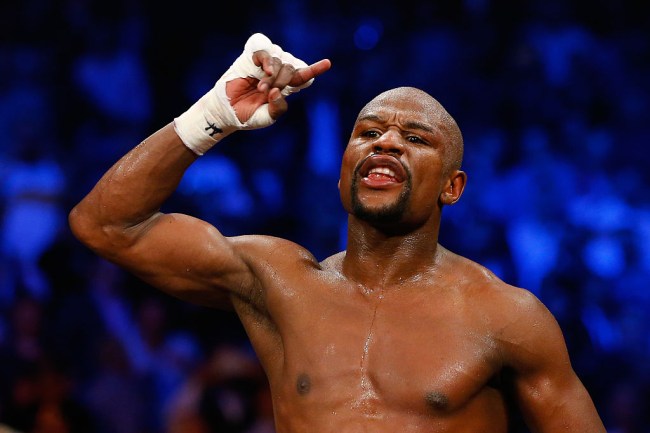 Last week, Khabib Nurmagomedov absolutely dominated Conor McGregor in the Octagon at UFC 229 in a match that was well overshadowed by the events that transpired after the Russian got his opponent to tap out.

Tensions were high going into the fight and Khabib managed to escalate them even higher when he vaulted over the cage to go after members of McGregor’s coaching staff to incite a wild brawl that rivaled the scene at Madison Square Garden following Bowe vs. Golota.

There’s little doubt Nurmagomedov and McGregor will face off again even though the matchup will almost certainly be as lopsided as their first— assuming Khabib doesn’t follow through on his promise to quit the UFC if his team is punished for their role in the fracas.

However, it appears the undisputed lightweight champion has a backup plan after he decided to turn his sights on Floyd Mayweather Jr. this weekend and challenged the undefeated boxer to step into the ring with him.

Mayweather is currently gearing up to come out of retirement for the 17th time to face off against Manny Pacquiao but it appears he has no plans to hang up the gloves after that fight based on his almost immediate response to Nurmagomedov’s comments.

Khabib’s manager said the fighter would need at least $25 million to defect from the UFC but it’s hard to imagine he’d have a tough time getting the money he wants based on the insane amount of hype (and revenue) a fight between him and Mayweather would likely generate.

Khabib is a forced to be reckoned with in the cage thanks in no small part to his ground and pound game and submission prowess, so while I don’t want to discount his stand-up abilities, you really have to wonder if he’ll be able to make the transition better than McGregor did.

With that said, there’s a 100% chance I’d shell out for this fight to see if he can.