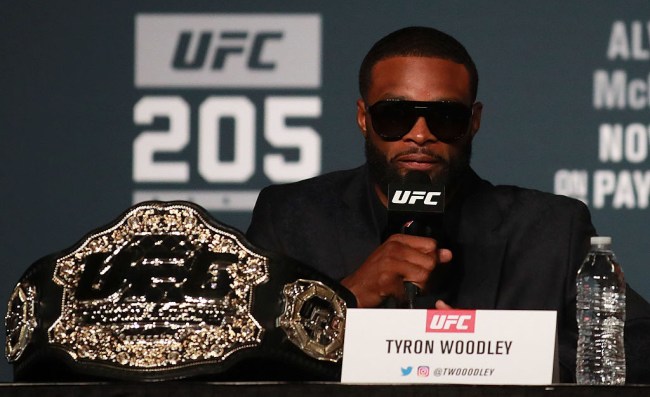 After Tyron Woodley’s fight at UFC 214 where he successfully defended his UFC Welterweight Championship against Demian Maia, UFC President Dana White had some VERY harsh and very public criticisms of Woodley’s performance.

During the post-fight press conference White said, “Listen, when you break a record for the least punches ever thrown in a five-round title fight, and you beat it, by I think it was like 130 [strikes] and these guys threw 60 or something like that, I think that sums it up.”

“The guy [Maia] had one eye in the first round and you’re [Woodley] faster, you’re stronger, your hands are better, you’re explosive. I believe that Woodley could’ve finished that in the first round, and if not, he definitely could’ve finished it in the second round. If you had a remote control for that guy, he’s a freak of nature, he’d be an incredible fighter. Listen, it’s easy to say a win is a win but when you get booed out of an arena, that means people don’t want to watch you fight, you know. And that’s how you make a living. It’s not good if people don’t want to watch you fight.”

White wasn’t done there either, continuing to bash Woodley, “[If] You ask fans if they want to see Woodley fight again, I think that will be a flat out no,” White said. “Who wants to pay to see Tyron Woodley fight again? He’s an absolute physical specimen, the guy could’ve finished the fight at any time he wanted to but, you know, he didn’t want to take the risks. [If] you take no risks, you get no rewards.”

Appearing on The MMA Hour on Monday, Woodley responded to White’s criticisms with a rant for the ages in which he brought up numerous very valid points about how White should not have said what he said and the way that he’s been treated as compared to a certain other UFC champion.

“I don’t care so much about the fans, but when your job title is promoter, promote your f*cking fighters,” Woodley said Monday on The MMA Hour. “Promote your champion. Don’t demote your champion. I threw my shoulder out in the first round, I wasn’t able to throw any damaging shots — for you guys who don’t understand what a labrum tear is, go get on Google or Wikipedia and figure it out — and I still stayed the course, I stayed on path, I stayed on point, I executed the gameplan. I had to reduce all of my shots from overhands, uppercuts, things that were hurting my shoulder, to straight punches.

“So, sorry in advance, I’m mad because I’ve had this surgery before. It’s not a fun one. It’s not a quick recovery. It’s not something that I’m excited about. I’m going to get a couple second opinions. Literally I’m in the Uber right now, I just f*cking got out of the doctors office, like right this second. There’s paperwork in my hand. So I’m just, I’m owed a public apology. You’re going to publicly scrutinize me, Dana White? You publicly need to apologize to me.

“I’ve done nothing but good stuff for the sport. I’ve done nothing but be a good model for the f*cking organization. I go out there and I fight with integrity. I covered your sport from the FOX desk a week before my fight. I always uphold my responsibilities to the organization. It’s timeout for that. The word behind ‘business’ is ‘man.’ You need to be a man, you owe me a public apology. And if I don’t get that, I’m going to start leaking some sh*t that people don’t want to be out in the wind. I’m not even kidding about that.”

Woodley was then asked to elaborate on what he was talking about regarding leaks, but declined, saying, “They know what I’m referring to. I’m due a public apology.”

Later in the interview Woodley brought up Conor McGregor and how he gets treated differently by the UFC.

“What happened to your golden boy Conor McGregor when he couldn’t get Nate Diaz out and he was missing too many punches?” Woodley said. “He folded and he quit. He laid on his stomach, and not even to a super-deep rear-naked choke, he quit. My shoulder popped out, not once, three times in that fight. I felt it the first time, I’ve had a labrum tear before, I’m like, ‘oh sh*t, I think I tore my labrum.’ And then I threw a couple more overhand rights, and each time it threw out. I threw a punch to the body and it came out, then I missed a punch and it felt like it slipped out.

“But what do I have to do? I said this dude is not taking my belt, he’s not walking out of the Octagon with them saying ‘and new,’ he’s not putting on that (champion’s) jersey that I know they’ve got down there by ringside that they want to put on him so f*cking bad, he will not wear that today. And that’s what I did.

“So that’s why I’m upset, I’m upset because I don’t get the simple courtesy of a human, the simple integrity that if you have a problem, come talk to me first,” Woodley continued. “I’ve got thick skin. I’ve had some terrible fights where I deserve a little smoke for it. And guess what, did I complain when somebody said something about how Rory (MacDonald) whipped my ass? He whipped my ass, I didn’t fight that night. He came out and he gave it to me. Never have one day made an excuse.

Woodley wasn’t through there either. He continued to make even more great points…

“The thing about it, be a straight shooter to me,” Woodley said. “That’s how I operate. I can’t speak for Amanda Nunes and Demetrious Johnson. Those are my friends and you always want to see them maximized and getting what they deserve. But speaking for myself, the way I deal and operate, you come and talk to me. You feel like I had sh*tty fight? Come pull me to the side before you get on the podium. If you feel like I didn’t deliver or I didn’t promote or I’ve done something negative, or you didn’t like what I posted on social media or you had an issue with something I said on FOX, or whatever the situation is, I’m a communicator. Come to me. Talk to me about it.

“I don’t want to hear about it afterward, because at that point I feel like you’re not promoting me. You’re demoting me. And then on that level, you can’t selectively promote. You can’t selectively promote and excessively promote certain individuals, and then the champions, the people who are out there fighting in the toughest divisions in the world, don’t get the equal and the same promotion. I just can’t see that. I can’t see how our sport, if you recognize the people who talk the most stuff, who drop the most profane tongue, who actually throw the water bottles, who really actually are the most unprofessional, those are the highly promoted and those are the most paid athletes. Is this still a sport?”

Between all the McGregor vs. Mayweather talk and Jon Jones talking about fighting Brock Lesnar making headlines, his question has some validity.

Check out Woodley’s entire spot-on rant below, because he covered so much more, like the fact he was supposed to fight Georges St-Pierre, his fights with Stephen Thompson, and how he fought Maia on short notice as the champ.