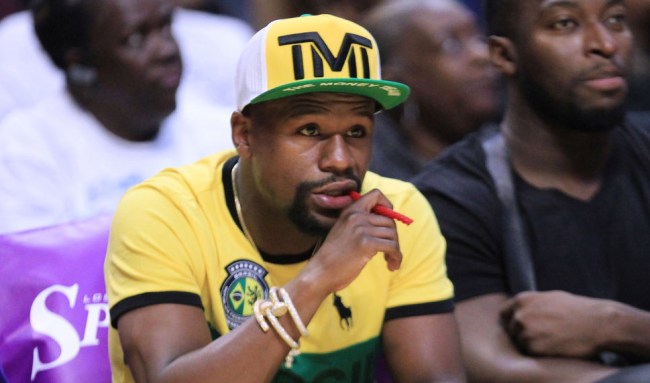 As every boxing fan knows, when it comes to money Floyd Mayweather can never have enough of it.

Dude is one of only three people to earn over $1 billion in their athletic careers, Michael Jordan and Tiger Woods being the other two. (If you adjust for inflation, Arnold Palmer, Jack Nicklaus and Michael Schumacher also join the billion dollar club.)

However, as every boxing fan also knows, Floyd Mayweather spends money likes it’s pouring out of a tap (which it kind of has been for him).

The “retired” Mayweather has already signed on to fight in an “exhibition” fight against Japanese kickboxing star Tenshin Nasukawa for RIZIN on New Year’s Eve – and it’s all about the money he can make.

Khabib even said he would box Mayweather, but only if Floyd agreed to a second fight inside the octagon.

Last week, Mayweather said there was no way a fight in a cage was going to happen, saying, “It’s my way, my rules. I’m Floyd ‘Money’ Mayweather.”

Over the weekend, UFC president Dana White doubled down on Mayweather having to fight Khabib in the octagon, saying, “We did that last time. You gotta come here this time … Every time he wants to box. You wanna fight? Want to make 150 million? Come over here and get your ass whooped.”

I don’t know about you, but to me those sounds like fightin’ words.