Floyd Mayweather Now Says His Fight With Japanese Kickboxer Is Back On: ‘It’s A No-Brainer’ 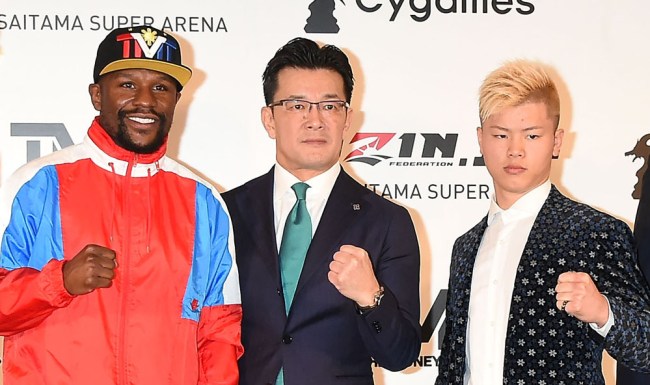 Floyd Mayweather has backtracked yet again, now saying his New Year’s Eve fight with 20-year-old undefeated kickboxer Tenshin Nasukawa at RIZIN 14 is back on.

The fight, which was first announced a couple of weeks ago, was initially given its full endoresement by Mayweather, “I wanted to do something different. I wanted to display my skills outside the US and be in a special fight. I want to give the people what they want – blood, sweat and tears.”

Three days later, the bout between the undefeated 50-0 boxer and the undefeated 31-0 kickboxer/mixed martial artist was off, with Mayweather saying he had been duped, saying in a lengthy post on social media, “I want it to be clear that I, Floyd Mayweather, never agreed to an official bout with Tenshin Nasukawa. In fact (with all due respect) I have never heard of him until this recent trip to Japan.”

Now, Mayweather says it is going to happen after all, but it’s just going to be an “exhibition.”

On Wednesday night, TMZ Sports caught up with Mayweather as he was leaving Peter Marco jewelry in Beverly Hills, when he informed them of the change (again) in plans.

“We’re gonna make it happen,” Mayweather informed TMZ, then explained what the event would be, saying, “Rules? It’s gonna be a little boxing exhibition. No kicking. I’m moving around with the guy for 9 minutes, and of course it’s gonna be the highest paid exhibition ever.”

No kicking? That’s probably for the best, at least for Floyd…

So what exactly is the point of the fight then?

“It’s a no-brainer. Just because I’m retired from boxing. I still make appearances worldwide and make a ton of money,” explained Mayweather.

As for whether Mayweather will actually step into the cage to fight someone like Nasukawa or Khabib Nurmagomedov, as has been rumored, his arch-enemy Oscar De La Hoya says there’s no chance.

“I don’t think he’ll ever step into the cage,” De La Hoya recently told MMAjunkie. “Making up these special rules, it’s ridiculous. If you’re going to box, then box inside the ring. If you want to become an MMA fighter, why limit yourself and set the rules so there’s no kicks or grappling?

“If you want to get involved and be in the MMA world, then do it. Don’t set the rules. I just think he should stick to boxing. That’s what he knows best. But he can’t help himself. If he ever fights a Khabib inside the octagon, c’mon, we all know what’s going to happen. That fight’s going to end in one minute – or 30 seconds.”