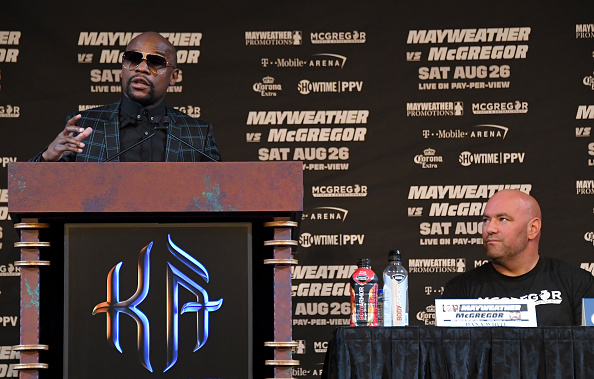 For the past month, Floyd Mayweather and UFC star Khabib Nurmagomedov have been taking shots at each other on social media and hinting at a potential boxing match.

Lot of talk about there about @TeamKhabib vs @FloydMayweather , Floyd is a legend but he’s 57 years old. Him, his manager @LEllerbei I don’t think none of them ready for this smoke if you want some come and get it.. young VS old UFC vs boxing. This time will be different result

While speaking to ESPN this morning, Dana White told them that he had sat down with Floyd Mayweather about a potential fight with Nurmagomedov but the UFC President made it clear that he would only make the fight happen if it were in the UFC with MMA rules.

“We went over there, we boxed him,” White said. “If he wants to do it again, he has to come to the UFC. I don’t think it’s realistic at all, but I didn’t think the [McGregor] boxing match was either. So, we’ll see.

“I actually had a meeting yesterday in Los Angeles about this,” “I don’t want to say anything that makes it sound like, ‘Oh wow, this could happen.’ But we had talks yesterday.”

It’s highly doubtful that Mayweather would ever get in the Octagon considering Khabib would easily maul him with his superior wrestling skills but White insists that it has to be an MMA fight.

“There will no be a boxing match. Obviously, if it was something that Khabib really wanted to do, we’d sit down and talk about it but I don’t like anything about it. I haven’t talked to Khabib about it at all. His interest needs to be defending his title over here. That’s what he should be focused on.”