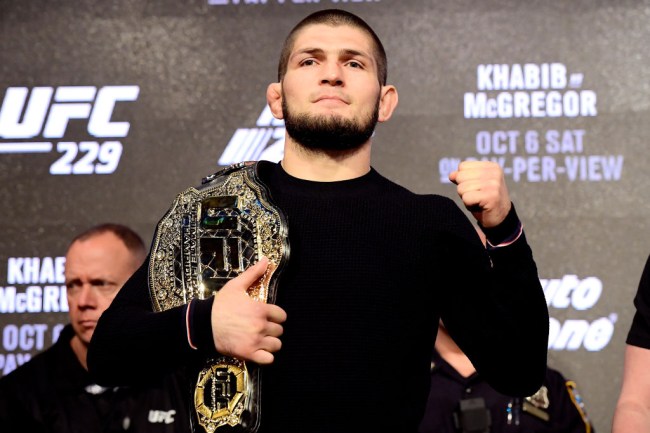 Khabib Nurmagomedov established himself as the most dominant fighter in the UFC last month when he made Conor McGregor look more than mortal in their bout at UFC 229 and absolutely disrespected him by talking shit in the middle of a round.

He also established himself as one of the more unhinged fighters in the UFC (which is no small feat) after hopping over the fence to go after McGregor’s coaching staff in one of the wilder post-fight incidents in recent memory.

The fracas was the perfect set-up for a rematch both myself and Joe Rogan think would be a waste of everyone’s time and money but Khabib quickly turned his attention to another opponent: Floyd Mayweather Jr.

The two have been going back and forth since the fight ended after Khabib called out the boxer while attending a fight in Russia.

Mayweather isn’t exactly a fan of backing down from a challenge and responded almost immediately.

Since then, the two camps have been negotiating with Dana White serving as a mediator and it seems like there’s a good chance it’s going to happen at some point.

Khabib wants the fight to take place in Moscow (which he says would attract 100,000 fans), but based on a recent report, he only has one real demand when it comes to making the bout a reality.

According to The Sun, he spoke to a Russian outlet about the terms of the fight and said there’s one thing in particular he wants Mayweather to agree to:

“If we make a bilateral agreement with Floyd Mayweather, the fans will be pleased.

“The first match in the ring and the second in the cage, then this would be real. I want to test myself in boxing once, that’s fair.”

I don’t just want to see Mayweather in the Octagon. I need to.

Don’t let me down, Dana.