Listen To Khabib Talk Sh*t To McGregor As He Beat The Snot Out Of Him At UFC 229, And Conor’s Weak Response 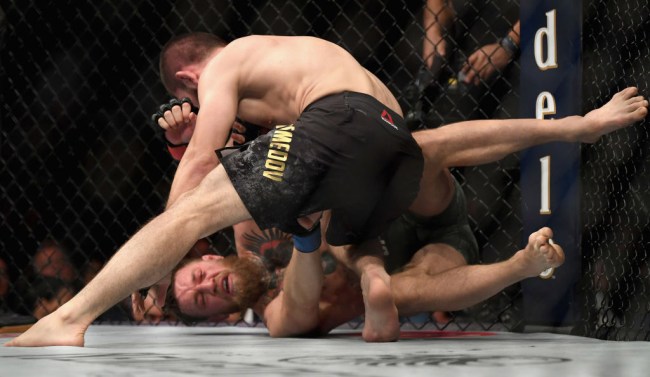 In the leadup to Conor McGregor and Khabib Nurmagomedov’s lightweight championship fight at UFC 229, “The Notorious One” was the only one of the combatants that was spewing any trash talk. And he was spewing A LOT of it.

Khabib pretty much just sat there and did nothing, even when directly in the presence of McGregor trying to get into his head.

Turns out that the only thing that got into Nurmagomedov’s head were the receipts he was going to cash on his way to making McGregor tap out to move to 27-0 in his MMA career.

Oh, and he was also saving his trash talk for a more opportune time, like when he was raining fists down in Conor’s dome during second round of the fight.

As the round came to an end, McGregor seemed to be trying to make Khabib not take his previous insults so dang personally, telling Nurmagomedov, “It’s only business, it’s just business.”

That’s like the equivalent of the class bully getting his ass handed to him and crying that he was just kidding when he picked on someone.

As MMA Fighting points out, this isn’t the first time Khabib has talked to his opponent while laying a beatdown on him.

Back at at UFC 205, as he was running through Michael Johnson, he told him he should just “give up.”

Khabib is a bad, bad man.