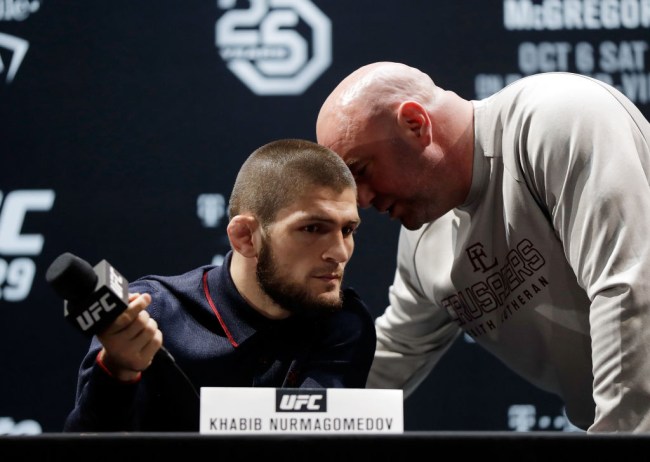 Just a day after Khabib Nurmagomedov’s father said said the punishment he’ll impose against Khabib for his post-fight shenanigans will be far “tougher than the UFC” and harped on instilling “discipline” in his son, Khabib hasn’t exactly been gracious in victory. The Eagle savagely taunted McGregor on Instagram following the match and is now taking aim at UFC President Dana White.

White refused to hand Khabib his title belt after the Russian fighter attempted to fly kick McGregor’s teammate, telling Khabib: “If I put this belt on you, everybody is going to throw shit into the Octagon. Someone else is gonna get hurt.”

While White recently revealed that the undefeated fighter would keep his lightweight championship title after there was talk of stripping it, Khabib has still yet to receive his $2 million payday for the fight, as it’s being withheld by the Nevada State Athletic Commission upon investigation of the incident.

In a recent Instagram post, Khabib let Dana White know that his best course of action was handing over the lightweight championship belt he withheld in the octagon, or his pretty BMW would feel his wrath.

Caption: @danawhite you lucky that you give my belt, or I would smash your car, I know your parking location 😎
#SendmeLocaition

Was Khabib making a joke here? Was it a casual threat? Khabib can’t be too buddy-buddy with a guy whose gained the reputation of coddling Conor McGregor and described Khabib’s actions after the fight as “disgusting” so I’m going to go with the latter.

What we do know is that this isn’t the first time Khabib has posed in front of White’s car. This is him outside the T-Mobile Arena in December after beating Edson Barboza.