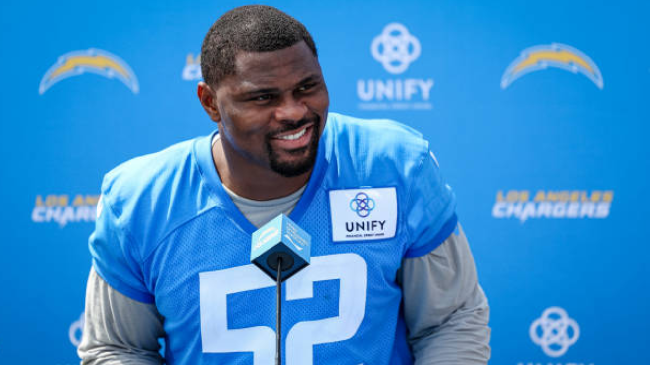 The slate for the NFL’s opening weekend will feature a big rivalry matchup in the league’s strongest division. The Los Angeles Chargers will host the Las Vegas Raiders in a rematch of the Week 18 game that kept them out of the playoffs.

Avenging that loss will likely be on the minds of most of the Chargers roster, but there is one player in particular who could be a bit more motivated to get a win against the Raiders.

Khalil Mack wasn’t a part of that loss to the Raiders, but he has plenty of history with the team. Mack was drafted 5th overall by the Raiders back in 2014 and quickly became one of the league’s best edge rushers.

Despite his early success, the Raiders decided not to sign him to a contract extension at the end of his rookie deal, instead opting to trade him to the Bears.

Despite that history, Mack says he holds no ill will towards the Raiders, pointing out that “the that he didn’t like probably aren’t there anymore”.

#Chargers Khalil Mack on facing #Raiders and if it is a revenge game anymore: "I mean the people that I didn't like probably aren't there anymore. I'll always have respect for the organization. It has calmed down (from the first two meetings). It's still the same. You'll see."

Mack also made it clear that Derek Carr was not one of those Raiders he didn’t like.

“That’s my brother. I like to talk trash here and there. I feel like that’s a bond that can’t be broken when it comes to that, but come Sunday it’s on and poppin’. . . . He’s an ultimate competitor. One of the best in the game. Somebody that I highly respect when it comes to the leadership aspect, as well as the quarterback position.”

Mack might not be feeling the need for revenge, but this rivalry matchup between the Chargers and Raiders is sure to deliver in Week 1.