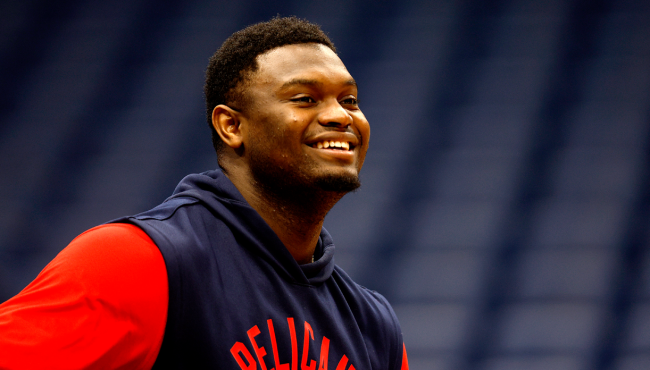 Zion Williamson got an unexpected gift on his 22nd birthday on Wednesday. While working at his basketball camp in New Orleans, the Pelicans big man was treated to a little trash talk from one of the young campers that was in attendance.

Williamson was mic’d up by the Pelicans during the youth basketball camp at a local YMCA when the boy told Zion that his stepfather is as tall as Williamson and plays better defense.

“My dad’s tall as you, my stepdad…!” the little camper told the big man.

“What does that mean?” Zion replied.

“He plays better defense than you … and offense!” the boy responded.

“No he… What?! What?! You don’t even believe that!” Williamson shot back with a subtle grin.

“I still think you are the best player though!” the kid added, trying to make the $231 million feel a little better about himself.

Imagine meeting one of the biggest young stars in the NBA and talking trash to him. Kids, man…

Lmmfao exactly I wouldn’t even get out the car

“Tell your old man to drag Walton and Lanier up and down the court for 48 minutes.”

Zion hasn’t played in an NBA game since May 4, 2021 and has only appeared in 85 regular season games (out of a possible 226) over the three seasons he’s been in the NBA due to several injuries including a fractured foot and surgery on his right knee.

It’s numbers like that and being called a “once-in-a-generation type athlete” by people like Kevin Durant that made New Orleans agree to a max contract extension worth up to $231 million for the big man on Wednesday.

Now, with no player option for the fifth year of the contract extension, Williamson is locked in with the Pelicans at least through the 2027-2028 season.