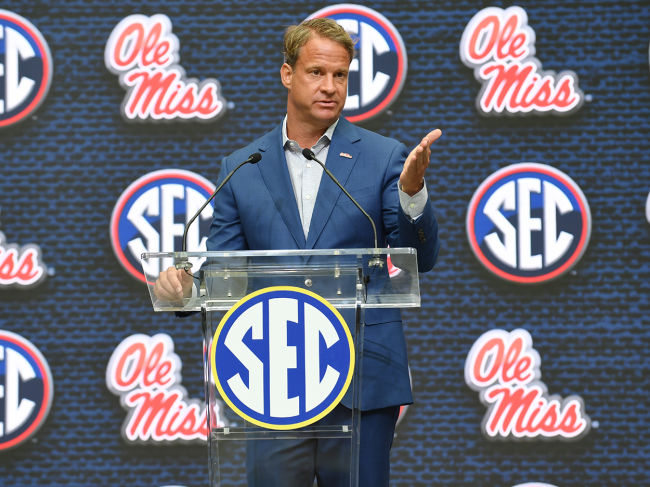 Ole Miss football added a new punter to its roster last week and Lane Kiffin’s explanation for how the Rebels found him is amazing. He joked that they discovered him at a party.

Charlie Pollock, who previously punted at Nevada, joined Ole Miss on Thursday. The team’s only other punter has been injured and unavailable during fall camp.

As a result, Kiffin sent his staff on a mission— find a punter. And they did.

Pollock entered the transfer portal after the 2020 season but did not play in 2021. He was the nation’s No. 13-ranked punter in the Class of 2020 and joined the Wolfpack on scholarship as a two-star recruit.

Despite the year off, Pollock is going to be crucial for Ole Miss over the next few weeks. The 6-foot-1, 250-pound punter may even end up as the starter come Week 1.

How he was discovered, however, is rather unique. Kiffin was asked about Pollock during a press conference after a scrimmage on Saturday and — with a big smirk on his face — explained that his staff found his new punter at a keg party.

“Yeah, I don’t know a whole lot about him,” Kiffin said. “I think he was down at the frat house. You know, like, at a keg party or something. Where they got him from. So, we’ve got some conditioning work to do with my guy. We just said, ‘Hey, someone go find a punter on campus.’ And so, we found one that actually used to punt Division I. So, you never know.”

It was probably a joke, but it’s really fun to imagine that Pollock was showing off his punting prowess in the front yard of a fraternity house when a staffer just so happened to drive by and pull him aside to ask if he wanted to kick for the football team. It’s much more fun that way.