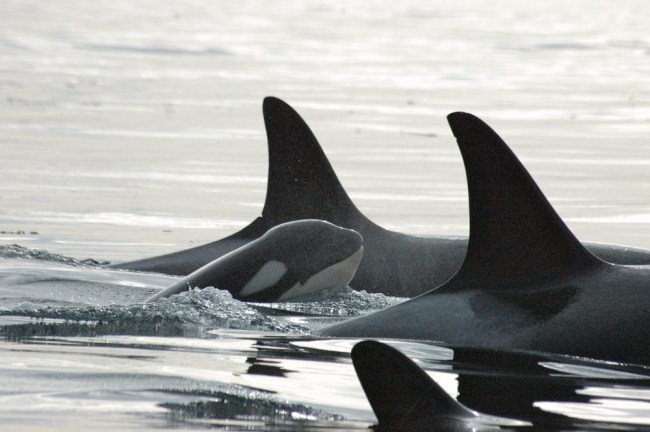 Norway’s been high on my list of countries I want to visit. The food and people are supposed to be awesome, and it’s one of the top destinations in the world to see the Northern Lights. I now have another reason to visit Norway, to see the surfing killer whales which just crashed the local Lofoten Masters surfing competition.

It might surprise you to find out that Norway has some of the sickest surfing in the world. The problem is the water is colder than a polar bear’s toenails, and it takes a special kind of person to get in the water and paddle out wearing the thickest wetsuit imaginable. The payoff is worth it if you’re in pursuit of awesome waves that aren’t crowded. There’s also zero danger of a shark attack because the water is too cold for any sharks to inhabit…And you get to see some killer whales like this:

Two competitors remained in the water while a third rode a wave a short distance to the beach, where he held his hands over his chest before raising them above his head.
The event, first held in 2007, continued and was later won by local surfer Maria Petersson and Edi Siswanto, a surf instructor from Bali.
Siswanto told Al Jazeera surfing conditions in Norway could be “as good any in Bali” and that there were “no danger of shark attacks”.
“You’re more likely to be watching sea eagles and seals as you wait for the wave to ride,” he said.

This took place in the middle of a heat during the 2017 Lofoten Masters, a surfing competition that’s been running every year since 2007. Looking at my weather app, it’s pretty much low 40’s to the upper 50’s/low 60’s every day right now in the Lofoten Islands where this gnarly killer whale encounter took place. That’s not exactly ‘surfing in Antarctica’ conditions, but I’m willing to bet that water is fucking frigid. If you enjoyed that clip above, you’ll dig this: bros surfing underneath the Northern Lights in Iceland.