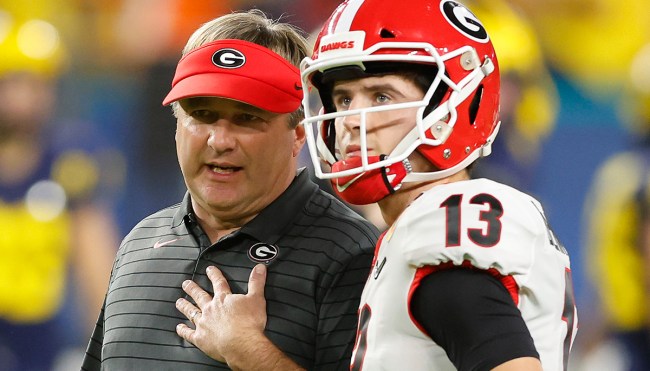 Georgia’s defense was arguably the collective standout of the most recent college football season, and while the squad on that side of the ball played a major role in the Bulldogs securing a national title by beating Alabama on Monday night, it’s impossible to overlook the contributions of starting quarterback Stetson Bennett.

The fact that Bennett even played in the national championship game is a minor miracle when you consider how he got there. The Georgia native was a two-star prospect coming out of high school, and while he received four scholarship offers to play in college, the fact that they were from Mercer, Georgia Southern, Middle Tennessee, and Columbia tells you all you need to know about his perceived potential.

Bennett would ultimately opt to head to the Unversity of Georgia, where he earned a spot as a walk-on his freshman year. He’d transfer to a junior college for his sophomore campaign before returning to Athens, and while he did eventually manage to earn a scholarship, it seemed very likely he’d play second fiddle to a superior starting QB for the rest of his college career.

As we all know by now, that was not the case.

Bennett alluded to the unconventional path he took to reach the apex of college football following the national championship game, but there’s another quote that perfectly sums up just how far he’s come.

“Just keep fighting. Keep your mouth shut. Work hard. Life is tough, you just have to fight through it.” – Stetson Bennett #truth pic.twitter.com/oxkQU4seO0

On Tuesday, Derrik Allen—the father of the Georgia Tech safety of the same name—shared a story about a conversation he had with Kirby Smart when his son was working out with Stetson in 2017. During their exchange, Georgia’s head coach explained why he decided to give the QB dubbed “The Mailman” a shot despite the fairly dim future he predicted for him.

Sitting on a golf cart w/ Kirby and @NewEraGrind while my oldest was working out for Mel Tucker & Stetson & 2 other QB’s were throwing for OC & Kirby said “that little QB they call him mailman he’ll prob never play here but I’m gonna bring him in as a walk-on bc he tough as shit” pic.twitter.com/sJWb1byYOv

I think that’s what kids these days refer to as a “glow-up.”