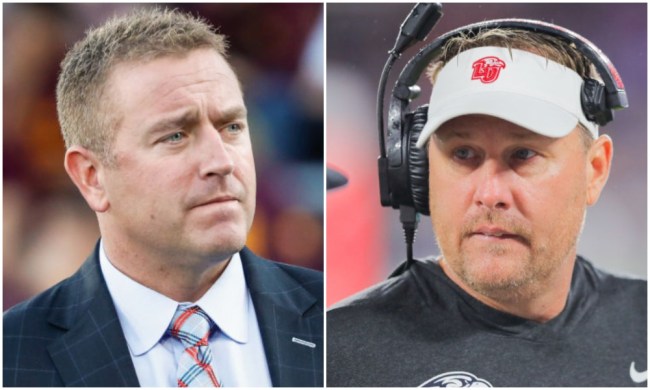 Immediately after Auburn announced that it had fired Gus Malzahn after eight seasons at the helm, a lot of the attention turned to Hugh Freeze and the possibility that he could return to the SEC and take over the Auburn program.

Malzahn’s felt like it was in the works for years and so too has the idea of his replacement being the former Ole Miss head coach. After Malzahn’s firing, CBS Sports reported that Freeze was vetted for a possible return to the SEC and is expected to be the top candidate for Auburn.

ESPN’s Kirk Herbstreit also believes that Freeze should be Auburn’s first choice and that if the university can look past his mistakes made at Ole Miss then the Tigers should absolutely go out and hire him.

“I think he is very different than Gus offensively even though they get labeled from the same coaching tree and coaching branch. I think he’s different in the pass game. I think he’s got a way about him. He competes. He’s done very well against Alabama head coach Nick Saban in recruiting and competing against him. I don’t know. That’s who I would look at.”

Freeze was essentially exiled from the SEC after Ole Miss was hit with recruiting violations and having alleged calls to an escort service, but the growing consensus seems to be that he’s served his time outside of the Power Five and could return to the SEC.

Freeze led the Rebels to 39 wins in five seasons (before the NCAA took 27 of them away) including a Sugar Bowl win over Oklahoma State in 2015.