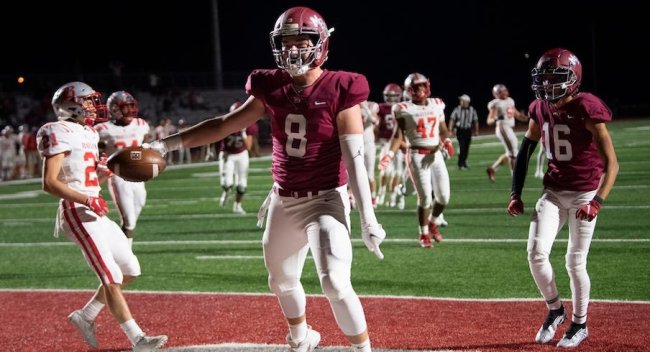 Zak Herbstreit is headed to Columbus, Oh. to play football at Ohio State, just like his father. Herbstreit, whose father Kirk is a former Buckeye quarterback and current ESPN commentator, announced his commitment on Wednesday as a preferred walk-on.

Beyond excited to announce that I will be accepting a PWO and continue my academic and athletic career at the Ohio State University! Dream come true! pic.twitter.com/UuC22V5LDD

Zak is not ranked on recruiting sites, but the 6-foot-2, 217-pound tight end earned first-team All-Region honors for his senior season at Montgomery Bell Academy in Nashville, Tennessee. He recorded 28 catches for 345 yards and four touchdowns in 20 games over his three years on the varsity level and helped his team finish ranked No. 13 in the state as a senior.

Herbstreit has two older twin brothers, Jake and Tye, who are both walk-ons at Clemson. Tye plays wide receiver and Jake plays safety. Neither of them received an offer from Ohio State, but Kirk Herbstreit said earlier this year that Zak had been in contact with Ryan Day and the Buckeyes staff quite a bit throughout the year, so his offer does not come as a surprise. He was quick to congratulate his son on Wednesday.

Zak-
Congrats my man. So proud of you. Chase your dreams. Your family is here to support you and love you all way through. So cool to see you headed to Ohio St. We’re beyond excited for you! https://t.co/taEdYTD5AC

Kirk played in 42 games for the Buckeyes from 1989-1992 and earned the starting job as a senior. He completed 155 passes for 1,904 yards and four touchdowns that year. Ohio State finished 8-3-1 that season and finished the year ranked No. 19 in the AP Poll after losing to No. 8 Georgia in the Citrus Bowl.

Zak’s commitment marks the third generation of Herbstreits to play in Columbus, with his grandfather Jim having played in the 1906s. While he may not be the most talented of tight end recruits, he will immediately be a big part of the team’s identity. Wouldn’t it be fun if Kirk called a completion to his son?