Klay Thompson’s Dad, Mychal, Blasts Media For His Son Not Being Named To All-NBA Team 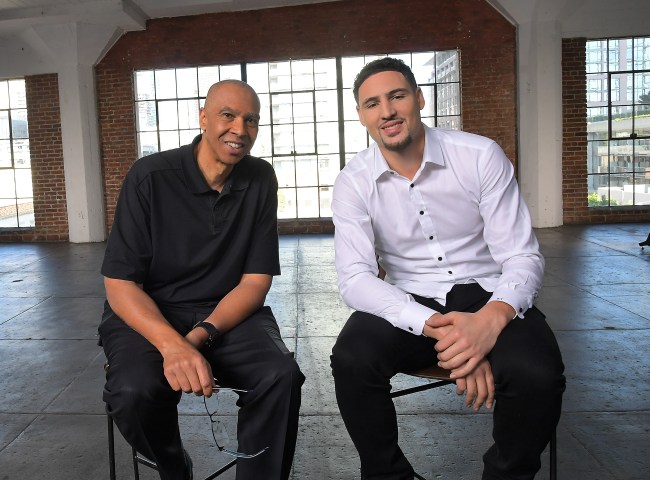 Klay Thompson has All-NBA skills and is part of, arguably, the best backcourt in the history of the league, but the Golden State Warriors sharpshooter doesn’t have the official title of being All-NBA. That snubbed came last week when the teams were announced, which led to a timeless reaction from Klay after hearing the news that the media didn’t put him on one of the teams — which, had he been selected, would have made Thompson eligible for a five-year, $221 million supermax deal with the Warriors this summer. So, yeah, he had every right to be pissed, which is why Klay Thompson voiced his frustration upon hearing the news about being left off.

Klay Thompson learns he didn’t make All-NBA (“Oh I didn’t?”) and is clearly a little ticked (it affects his next contract): “When you go to five straight Finals, it takes more than a couple All-NBA guys…Do I think there are that many guards better than me? No.” pic.twitter.com/bW5DiBavo1

Given Klay Thompson’s All-NBA snub, he’ll now have to “settle” for “only” the possibility of a $191 million deal this summer if he’s given a max deal, so, sure, it’s still a ton of money, but the media cost him an additional $30 million. Considering Klay averaged 21.5 points, shot 46.7 percent from the field and 40.6 percent from behind the arc during the regular season, he had every right to be upset. It’s hard to think there are 15 players better than him in the league, but, hey, that’s what members of the media think.

Although Klay was visibly mad about being left off one of the All-NBA squads, his dad, Mychal Thompson — the No. 1 overall pick in the 1978 NBA Draft — seemed just as disappointed. In an interview with The Athletic‘s Tim Kawakami last week after hearing the news about his son’s snub, he offered his thoughts, saying that, while losing out on $30 million is big, it’s more than just about the money to Klay Thompson; it’s about being recognized as one of the top players in the league.

“Everybody is saying it’s about money, but it’s not,” Mychal told The Athletic’s Tim Kawakami last week. “It’s about recognition for his two-way contribution.”

“Yeah, it’s a lot of money. But when you are talking about the astronomical numbers that the best NBA players make, you can’t quibble over it because you’re still making generational-changing money. Too many people out there struggling in the world to make ends meet for anybody to be whining about not making $30 million more.”

Whether you believe Mychal Thompson or not, Klay’s dad then made it really clear who’s to blame for the All-NBA snubbing; the media. That’s obvious because they’re the ones actually voting for the honors, but Mychal was pretty direct in pointing the finger at the media — while also giving his own reasons why his son should have been selected, pointing out Klay’s two-way abilities.

“Frankly, I thought that the media was more savvy about what it takes to be a champion. Not just focusing on one side of the court—you need both sides consistently to get to the level where the Warriors are at, why they’re such a great team. Put the focus on both sides.

There were previous reports saying that Klay Thompson has been tired of being the third option on the Warriors, and, if that’s actually true, being snubbed for the All-NBA honor probably leaves him even more bitter. With his free-agency coming in the next month, he’ll have a chance to cash in and, potentially, become the face of a new franchise — but, damn, that $30 million would have been nice to have in the bank.