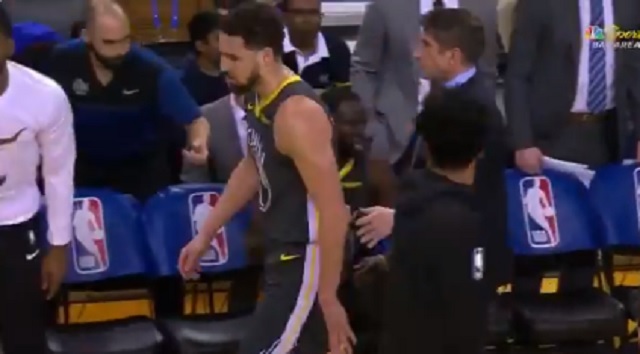 Klay Thompson had a brief scare in the Warriors final game before the all-star game.

In the second quarter of tonight’s Warriors-Jazz game Thompson was forced to leave the game after dislocating his finger when it got caught on Jazz guard Donovan Mitchell’s jersey.

Klay has a finger going in the wrong direction 🤢 pic.twitter.com/UVTHgdOEsu

Klay and his messed up finger pic.twitter.com/kGtES4XU9j

Thankfully Klay was able to tape his finger and get back in the game for the second half.

Klay's ring finger is taped to his middle finger, making his left hand look like a three-pronged fork

This player left the game because of this.
This player has returned in said game.
This player’s name is Klay m’fing Thompson. #DubNation https://t.co/E6HfAbghLl