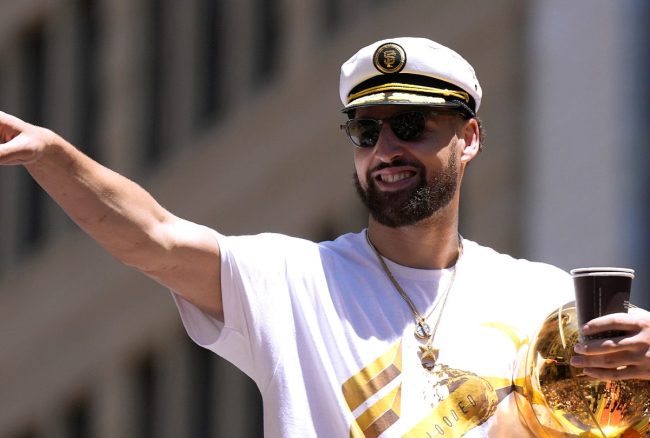 Klay Thompson is still enjoying his offseason after being seen slamming a beer at a recent Dodgers’ game. The NBA star is fresh off of a championship with the Warriors, which he apparently hasn’t stopped celebrating.

In his first season back from injury, Thompson helped lead his team to the NBA Finals where the organization clinched its fourth title in eight years. He landed an ESPY for Comeback Athlete after averaging more than 20 points a game, though that did come with a bit of controversy.

A number of clips surfaced from the Warriors’ championship celebration of the guard drinking. He was seen facing a bottle of Hennessy, dropping one of his championship rings, and stumbling into a woman causing her to tumble to the ground.

Thompson is keeping the party mode going throughout the summer.

On Sunday, he was spotted in Los Angeles attending a Dodgers’ game. He was captured on the big screen chugging a beer while taking a video, which he later posted on social media.

The beer chug from Klay’s point of view 😂

Thompson’s performance was impressive, but he wasn’t the best performer in the family on Sunday afternoon.

The basketball star was actually on hand to watch his brother, Trayce. And the Dodgers’ outfielder showed out, tallying a pair of hits while recording two RBIs in Los Angeles’s win.

It had Klay pumped up.

Klay was fired up after his brother Trayce's RBI double pic.twitter.com/1lK7hmX9iu

Klay will continue to root on his brother, Trayce, this summer. Maybe they will both be celebrating championships when the year is through.