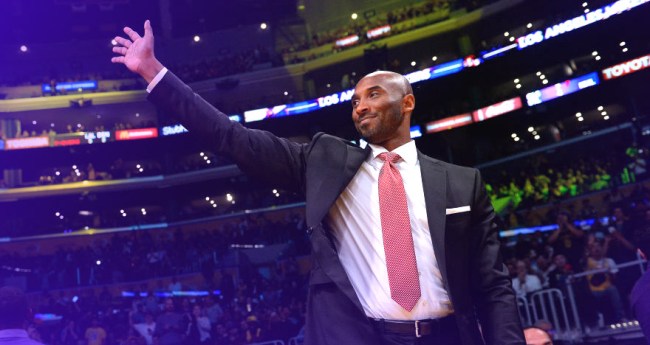 That record is even better when you add in the fact that the team that’s won three of the last four NBA titles, the Golden State Warriors are only two games ahead of the Lakers at 16-9, and that one time the Warriors didn’t with the NBA Championship in the past four seasons the team that beat them had, you guessed it, LeBron James on it.

So yeah, it’s once again a pretty good time to be a Lakers fan.

One of the biggest Lakers fans out there, a guy whose number has been retired by the team, Kobe Bryant, is all in on the current team. So much so that he feels confident enough to take a shot at the very successful team to the Lakers north, Golden State.

During an appearance at the Lakers’ annual All-Access event at Staples Center on Monday, Mamba dropped this bit of trash talk on the Warriors and their fans, reports ESPN…

“They will figure it out. They have talented pieces and (Lakers general manager Rob Pelinka) has put them in position with incredible flexibility,” Bryant told the audience. “They will figure it out. So, enjoy the journey because we’ll be champions before you know it, and then we’ll just be laughing at all the Warrior fans who all of the sudden came out of nowhere.”

As for how he thinks LeBron, and the rest of the roster, has been adjusting, Bryant said, “Coming in here, to this organization and this city, it’s not anything that’s new to him. He’s always had the spotlight. He’s been able to deal with that gracefully. I think the difference here is that you have a collection of players and a lot of talent, all young. And so the challenge is, can they figure out what their games are individually sooner rather than later?

“Because at the beginning of the season, you saw a collection of individual talent try to figure out what it is that they can do and where they can do it on the floor — what are their games? And at the same time, try to figure out how to make those games blend in as a group. Right? And you can’t have both.”

Kobe also shared some takes on Rajon Rondo, Tyson Chandler, and told a story about how he still likes to talk sh*t to his former coach, NBA legend Phil Jackson.

“I love messing with Phil,” Bryant said. “I sent a clip to Phil of our girls running ‘Center Opposite,’ versus a zone. No kidding. Center Opposite, the second guard fill, swing, corner to corner. OK? I sent him the video. … He texted me back, ‘Man, they actually ran that beautifully!’ I said, ‘Yeah, they had a better coach, what the hell did you expect? And I didn’t have to burn sages for them to do that.'”