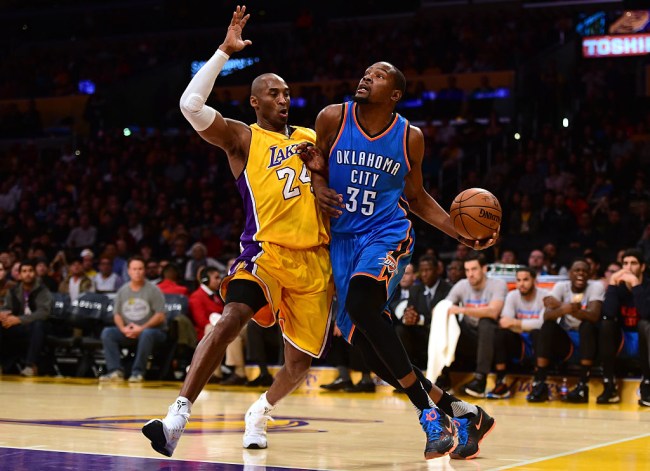 Kobe Bryant scored 33,643 points in his 20-year NBA career, good for third on the NBA’s all-time scoring list. Trying to defend him was like trying to play guitar with oven mitts on. Thousands have tried, and despite the media manifestations over the years, no one was truly a “Kobe Stopper.” But, as Kobe himself said, if there was one dude who would work him to the bone, it was former Celtic/Grizzlies guard Tony Allen.

In 2016, Bryant told TNT’s Inside the NBA that “the player [he] always had the most trouble with individually was Tony Allen. Always.”

In a recent interview on The Corp podcast hosted by Alex Rodriguez and Dan Katz, Kobe reaffirmed this notion while also opening up on the hardest player to guard in his two decade-long NBA career.

When he first came into the league, he was easy to defend because he couldn’t go right and shoot. He used to kind of shoot across his face, so that was a weakness that he had. Also in the post, he couldn’t turn left shoulder, everything was right shoulder, so that gave me areas that I could shut off.

Then he started developing it. And now he can pull up left, he can pull up right, he can shoot the long ball, he has runners, left hand, right hand. Before he had a left hand finish at the rim, I could always send him left, force him all the way to the basket. Even with the advantage of his size, he was still uncomfortable finishing with his left. So I could clamp the right hand and force him in a tough situation.

So I retired not being able to figure him out.

The respect is mutual. After KD won Finals MVP in June, he was asked by Vince Carter which players he would have loved to have played in the Finals. Here is what he said:

“It’s a tie between MJ and Kob,” Durant said. “Two guys that I think are a head above everybody else that’s ever played the game. Just their will to win is something that’s contagious, and it makes you a better player as an opponent as well.”

If KD hadn’t put Kobe on the same level as MJ, would Kobe have delivered Durant such high praise? Certainly wouldn’t have hurt his cause.