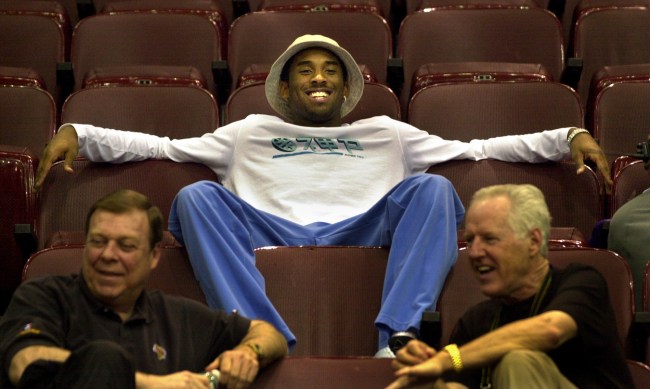 How did you fill your time when you were 17?

I spent the majority of my 17th year here giving my computer AIDS through shady Limewire downloads and thinking up clever AIM away messages to attract the attention of Christina Hendrickson.

Kobe Bryant, on the other hand, was engaging in workouts with NBA franchises en route to becoming the first guard to ever be drafted directly out of high school.

On June 22, 1996, four days before the draft, a 17-year-old Bryant worked out for the Los Angeles Clippers and Clippers employee by the name of Rex Kalamian, a current assistant in Sacramento, was in charge of filming what he would categorize as “probably the most athletic Mikan drill you’re ever going to see.”

Former Clippers assistant Rex Kalamian handled many video duties with the team in 1996 when Kobe Bryant worked out before the NBA draft. Here's exclusive footage.

Anyone who’s played basketball (humblebrag) knows that this is far more difficult than it looks, and to dunk off two feet standing still after a 60 second Mikan drill AT 17 YEARS OLD is just incomprehensible.

Via the LA Times:

“At one point Jim Brewer, one of the assistant coaches, walked by,” Kalamian said. “And he said to me, ‘Are you looking at what I’m looking at right now?’”

It was standard procedure for the Clippers to tape over workout sessions to keep current, but Kalamian felt the need to preserve Bryant’s workout.

“This one, I knew was going to be something that I would want to look back at someday,” Kalamian said. “I kind of put it aside and kept it in a box for a very long time.”

Clippers coach Bill Fitch liked to have draft prospects square off against Kalamian, a former guard at East Los Angeles College and Cal Poly Pomona. After annihilating Kalamian in a shooting drill, Bryant upped the ante: if Kalamian lost to him in a game of HORSE, he’d have to wash Bryant’s car.

Years later, when their teams played each other, Kalamian employed a ball boy to deliver the pre-draft footage to the visiting locker room.

Bryant sent back an autographed pair of game-worn sneakers as a token of appreciation with a note that said, ‘Give these to your son.’

“My son still has the shoes,” he said.