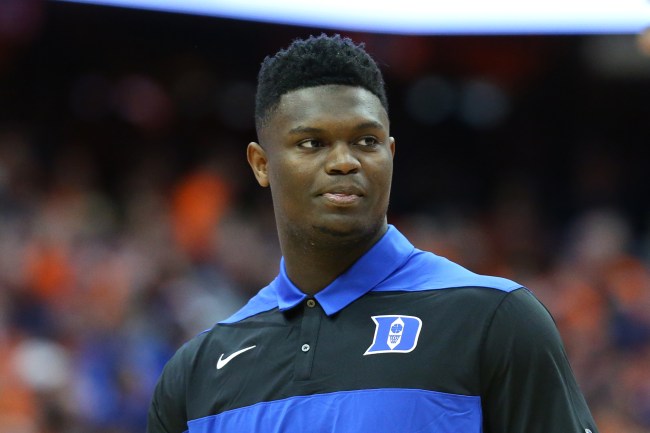 Kobe Bryant decided to hop on the Zion Williamson debate train during an interview with The Undefeated, telling the Duke Blue Devils’ superstar freshman that he should “finish your commitment” when it comes to either rejoining his squad for a national title run or shutting it down for the rest of the season and prepare for the NBA Draft. As most of us know, Williamson is projected to be the No. 1 overall pick — with some experts believing he could surpass $1 billion in career earnings — so Bryant’s honest advice might be a little bit surprising.

Here’s all of what Kobe Bryant had to tell Zion Williamson, per FTW.USAToday:

“Players should be able to choose and decide what the hell they want to do, to be honest. Whether you want to go to college or not really depends on you. In terms of Zion, if he’s healthy, he should go play. He made a decision to go to college, and injuries are a part of that process, and sometimes you get hurt, sometimes you don’t, man. But you made the decision to go to college and you made your commitment to the university, then by all means finish your commitment. I expect him to get healthy, get his knee better or whatever it was, and come out and kick [expletive].”

It’s an interesting take from Kobe Bryant, considering he never played college ball himself and went straight to the NBA as a teenager back in 1996. The reason was, presumably, so that he didn’t suffer an injury that could have derailed his pro career. And while Zion Williamson’s knee injury is just a mild sprain — which has kept him out the past couple games for now — it’s one that Bryant wanted to avoid 20 some years ago.

“That’s what we do, we play basketball.”

That said, Bryant’s opinion echoes that of Charles Barkley, who said that Williamson should get back on the court as soon as he’s healthy enough. In contrast, another former NBA superstar, Scottie Pippen, joins the millions of people saying Zion Williamson should never play another second for Duke again, and instead focus on his own future since he’s not seeing any money from playing college hoops.

While Zion Williamson does have an $8 million insurance clause should, God forbid, anything worse happen to him should he decide to come back and play for the Dukies, there are far many people who think he should think about himself here and move on from the college experience. Kobe Bryant offers strong support as to why he should return, but, remember, this is also the same Kobe who tried forcing a trade from the L.A. Lakers in 2007 while still under contract, so it’s a little contradictory when he says the teenager should finish his commitment.

With Duke losing two of three games without Zion Williamson, it’s clear they need the superstar freshman to be considered legit national title contenders once the NCAA Tournament starts in a couple weeks. This whole thing is pretty interesting, but, as a hoops fan, personally speaking, here’s to hoping Zion returns and lights up March Madness.