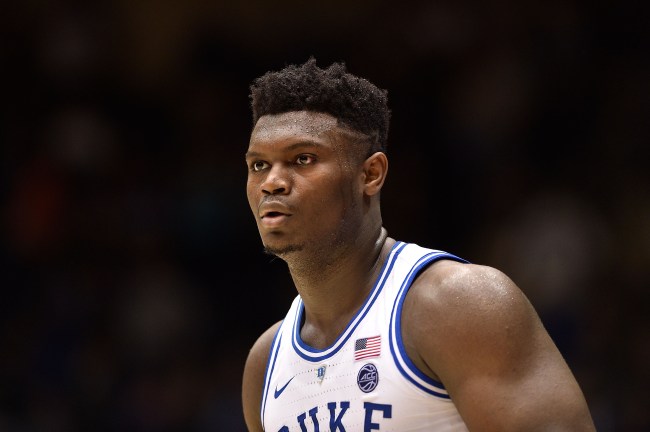 Zion Williamson has already shown that he’s the most hyped college hoops player since, arguably, Shaquille O’Neal about 25 years ago. From Zion’s personality to his insane play on the court, the freshman is expected to go No. 1 overall in this spring’s NBA Draft, and, assuming he lives up to the expectations, could earn a billion dollars in his career. No pressure or anything, though.

Given the fact Zion Williamson has already proven himself while suiting up for his Duke Blue Devils team this year, some are already suggesting that he just go ahead and sit out the rest of the season to prepare himself for the NBA. After all, just last week, Williamson was poked in the eye and had to miss most of Duke’s game against Florida State, and, just a couple of days ago, the Blue Devils saw another one of their star freshman, Tre Jones, go down with a shoulder injury that’s expected to keep him sidelined indefinitely, so why risk injury for Zion Williamson by playing in college, right?

That seems to be the thought of NBA Hall of Famer Scottie Pippen, who suggested Zion should just call it quits on his freshman season at Duke, openly saying that he’s proved enough to NBA teams. Take a look at what Pippen said on ESPN’s The Jump about the topic (editor’s note: starts at the 4:33 mark).

To paraphrase Pippen, here’s what he said:

“I think he’s done enough for college basketball, that it’s more about him personally now,” Pippen said Tuesday on ESPN’s The Jump. “I think for him as a young player (pauses), I would shut it down. I would stop playing, because I feel that he could risk a major injury that could really hurt his career.”

While Zion Williamson probably wants to lead his team to a national title this year and leave his mark on college basketball with insane performances in the NCAA Tournament, it might be smart to at least consider Pippen’s suggestion. We saw this in college football earlier in the season with Nick Bosa of Ohio State, who, after getting hurt, decided to leave the school and prepare for the NFL Draft. Like Zion, Bosa is considered the top prospect in his class and didn’t have anything else to prove.

Personally speaking, there hasn’t been a college hoops player who I’ve actually wanted to watch as badly as Zion Williamson since, maybe, Vince Carter two decades ago. Even then, though, Carter wasn’t looked at as a once-in-a-generation talent, so Zion’s more Shaq or LeBron James than anyone else, meaning he should at least consider leaving Duke if it’s best for his basketball career.