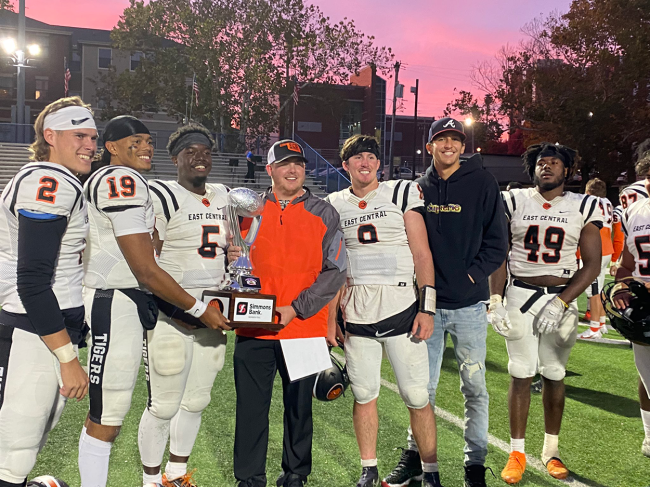 College football has a new youngest head coach and he is not much older than his players. East Central University recently named offensive coordinator Kris McCullough as its interim head coach for 2022.

McCullough is only 26 years old. He will be about four years older than his oldest player.

Over the last few years, McCullough has become one of the youngest, most intriguing offensive minds.

He began his coaching career at his alma mater, Henderson State and played a vital role in recruiting and game film breakdown. From there, McCullough became a quality control coach at Old Dominion before joining Fairmont State as the running backs coach.

In 2018, the then-22-year-old joined the East Central University staff as the quarterbacks coach and eventually became the special teams coordinator. Two years later, in 2020, McCullough was elevated to the offensive coordinator before adding assistant head coach to his title in 2021.

His offense has exploded under his watch.

Great things are happening here at East Central! Everyone gets to produce, just look at the stats.
Best record in 10 years and this is only the beginning!#COMPETE #FAMILY pic.twitter.com/t2LcEnWu3z

Now he is dropping the “assistant” from his title.

Al Johnson, who previously held the role of head football coach and interim athletic director, stepped down from his duties earlier this month. That left an opening at head coach.

Rather than holding a nationwide coaching search, the school chose to give McCullough a chance. He was named the interim head coach for 2022.

Should he find success as the head coach this fall, McCullough is expected to land the post on a permanent basis. Based on his upward trajectory, that is likely to happen.

McCullough has been impressive in his time at East Central University.

The Tigers have won nine games since McCullough took over the offense. There was an abbreviated 2020 season last spring, due to COVID-19 and they won two games.

And then, during the 2021 fall campaign, East Central went 7-4. It marked the school’s best record in exactly a decade.

To cap the strong season, McCullough helped lead the Tigers to a win over heated rival Southeastern Oklahoma State in the Great American Classic. If he can reach similar results as the head coach, it is his job to lose — at only 26 years old.

East Central competes in the Great American Conference on the NCAA’s D-II level.