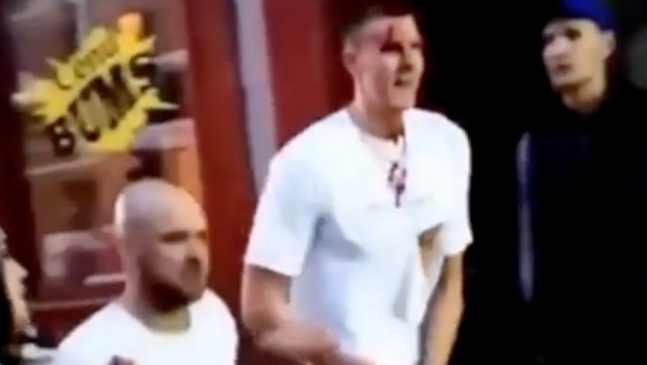 Video has emerged of the aftermath of Kristaps Porzingis getting into a fight. To make things worse for the Dallas Mavericks big man, he got his ass whooped in his hometown of Liepaja, Latvia.

Footage shows Porzingis bloody and bruised following a bar fight. Kristaps has a nasty cut above his right eye and his shirt is ripped. Friends attempt to calm Porzingis down, but he only gets angrier and shoves a woman out of his way as he confronts a man outside of a bar. However, it appears that authorities stopped Porzingis from getting to the man. Just like an NBA player, there’s always someone getting in their way from actually having to fight.

How does one even go about punching a 7’3″ man in the head? Do you get a step stool? You just have to throw a beer bottle like you’re David fighting Goliath right? I mean, you’re not getting a punch in on Kristaps who has the reach of Dhalsim from Street Fighter.

Porzingis seems to have gotten into a scuffle outside a bar in Latvia. 😳 pic.twitter.com/Y5jZ9YvfSy

This is more negative press for Porzingis, who was accused of sexual assault in late March. Porzigis was traded to the Dallas Mavericks from the New York Knicks in February and he missed the second half of the season due to a torn ACL injury.