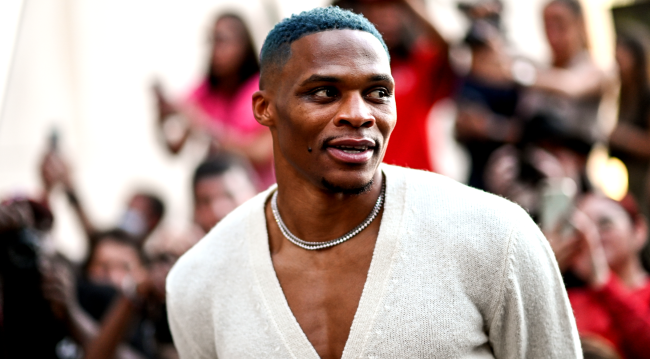 “I don’t really pay attention to what anyone else is doing,” Westbrook told BroBible in July. “I like to take risks with my looks. Mix and match colors, patterns, textures: anything that makes me feel good. Fashion is all about confidence, so I just do my own thing and have fun with it.”

Related: We Talked With Russell Westbrook About His Fashion Philosophy And Fans Who Want Him To ‘Shut Up And Dribble’

That fashion philosophy was never more evident than Westbrook’s appearance at the Thom Browne Spring 2022 show during New York Fashion Week over the weekend.

“Don’t address me unless it four letters” @kendricklamar pic.twitter.com/5c7rhRBZKx

Not many guys could pull off a ankle-length white kilt, off-white cardigan, lace-up leather boots and a diamond choker like Russell Westbrook did.

Nor should they, at least according to former NBA player turned hot take machine Kwame Brown.

In a video posted to social media, Brown went OFF on Russell Westbrook for his outfit.

“There’s two ways you could go, n—a. You can bite the apple and wear them muthaf—ing dresses like Russell Westbrook or whatever the f–k his name is, I don’t even wanna say this n—a’s name no more,” Kwame Brown ranted.

“But this ain’t this n—a’s first time in a dress so I don’t know why people so alarmed. This n—a’s been wearing dresses and weird a– sh-t. But like I told you, LBJ said, your leaders, they’ll give ’em to you. And just cause this n—a can jump high and play basketball.

“Not nary n—a I ever grew up and messed around with gonna be walking down the goddamn streets with a dress on and some muthaf—ing boots and keep my respect and say he heterosexual. Now if you gay, cool, I don’t give a f–k. I got gay female cousins, male cousins, it don’t matter about that.

“But when you say you a heterosexual male and that’s what you do, n—a, f–k you, and that’s my opinion,” Kwame Brown continued.

“So if you wanted my opinion on that, I think these n—as is exposing exactly what I said. These b-tcha– celebrities bite the mother f—ing apple and I never bit no apple. I just shut my mouth. That’s how you gotta do it. You gotta shut your mouth or bite that apple.

“And there’s plenty of n—as like me that just not talking. Cause that weird a– sh-t they’re around is weird as f–k.

“Just what kind of n—a y’all… What hood these n—as supposed to be from?! N—a had high heel boots and a mini skirt. What the f—k wrong with you? Man, please.”