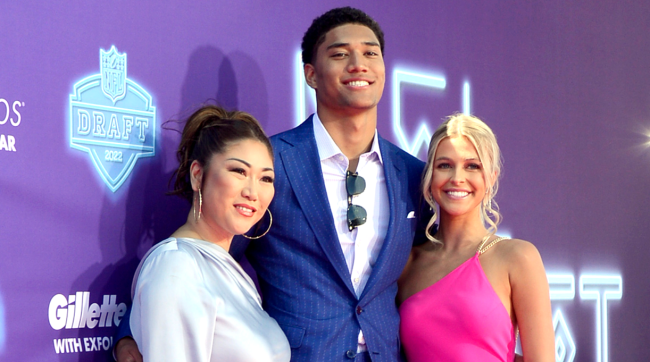 The Baltimore Ravens may have gotten the steal of the NFL Draft Thursday night when they selected Notre Dame safety Kyle Hamilton with the 14th overall pick.

Hamilton at various points during the months leading up to the draft was projected to go as high as number two to the Detroit Lions and was often mentioned as a potential top five pick.

According to 247sports.com, “ESPN draft analyst Mel Kiper rated Hamilton as the No. 4 player in the draft. Daniel Jeremiah of the NFL Network slotted Hamilton at No. 5. Dane Brugler of The Athletic placed him No. 6.”

A season-ending knee injury in October, however, may have scared some teams off, which, in turn, scared many of those who attended the draft with Hamilton as he began to slide.

“It’s kind of funny because when we first got in (the green room), everybody was laughing and smiling and then the whole mood of the room shifted,” Hamilton said. “Then slowly but surely, people started to tense up a little bit.

“The waiting game is tough for sure, but at the end of the day, I’m so thankful (how) it happened. I feel I went to the right team. Ten years later, I’ll be looking at this glad that I came to the Ravens.”

I'm ready to rock with the #RavensFlock 👊 Dreams do come true and it's all going down in Baltimore! Let's get after it @Ravens. Check out my new #PaniniInstant card here #WhoDoYouCollect #RatedRookie #NFLDraft https://t.co/e14bDhDOh9 pic.twitter.com/1jkczWs5hK

One of those people who was obviously thrilled that Kyle Hamilton was picked by the Ravens was his longtime girlfriend Reese Damm, who he’s been dating since high school.

Damm was so happy, in fact, that she broke out a special handshake for Hamilton after he was picked by Baltimore.

The handshake almost immediately went viral with most people finding it cute, but not everyone.

How cute is she?!

I already love this guy 💜

The handshake Kyle Hamilton did with his girl was so cringey 🥲🙃💀 why didn’t y’all just kiss and move on!! #NFLDraft

Kyle Hamilton and his girl with the moment of the draft! Perfectly executed Swaggy handshake and she looks BOMB. #CoupleGoals Goals #NFLDraft # pic.twitter.com/WubdutpLkV

In a deal with “Call of Duty,” it says TF141, which stands for Task Force 141, a group of special ops characters in the game. pic.twitter.com/9gBi3RjMeX