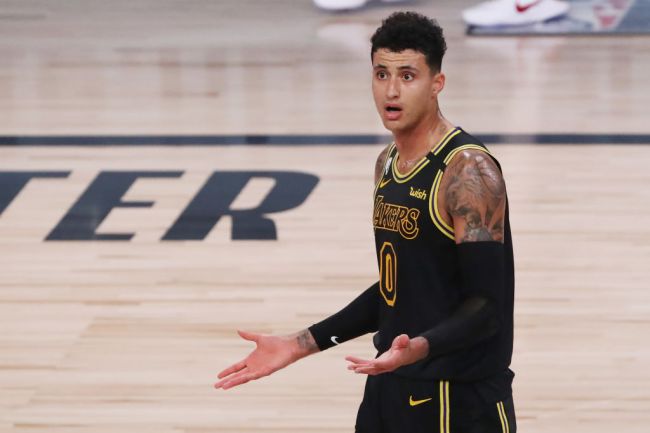 The Lakers obliterated the Warriors by 31 points on Monday night. Kyle Kuzma had a solid outing for Los Angeles as well with 17 points, five boards, four assists, and a couple of steals, but he could’ve ended the night with 18 points if he didn’t air-ball a technical foul free-throw in the second quarter.

It wasn’t just your typical air-ball that grazes the bottom of the net, either. Kuzma’s attempt missed the basket by multiple inches to the left. He legitimately would have been better off attempting the free-throw with his eyes closed.

The Warriors' bench after the air ball 💀 💀 💀 pic.twitter.com/lLqUr9NbTg

Kuzma was asked about the air-ball after the game and came up with one of the greatest excuses you will ever hear saying that there was a 3.5 magnitude earthquake in San Francisco during the time of his shot and that’s what caused the ball to go so far left. There was no earthquake in San Fran during the game. You can hear his response 1:30 into the video.

"San Francisco had a 3.5 magnitude earthquake and I got scared and it went far left." 🤣 @kylekuzma (17 PTS, 5 REB, 4 AST) gives @LakersReporter the scoop on his airball. pic.twitter.com/Ar42CImtVr

The earthquake excuse is honestly an impressive one. Either Kuzma came up with the story well-before his post-game press conference or it popped in his head during the moment, but either way, it was fantastic to see him tell the story with a completely straight face.

I’m not so sure Kuzma would’ve been too happy talking about the air-ball if the Lakers would have lost on Monday night, but he’s averaging 22 points and 10 rebounds over his last three games, he can brush off one of the worst free-throw attempts in NBA history like it’s nothing at the moment.