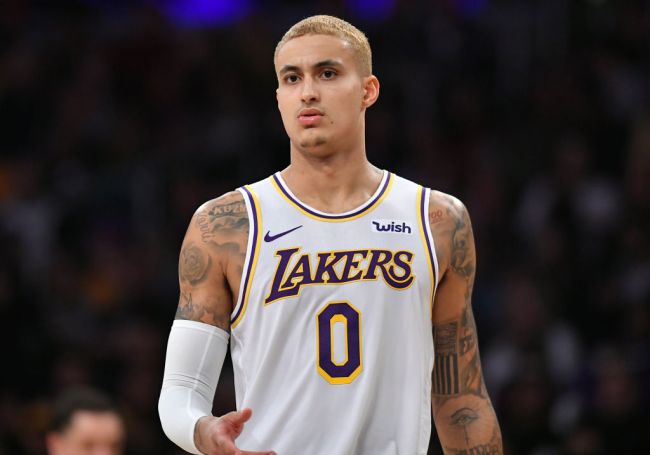 It appears that Kyle Kuzma is aware that he’s on the trading block.

Earlier this month Lakers beat writer Mark Medina said that he expects Kuzma to be attached in trade talks this offseason after a disappointing season that saw the team get eliminated in the first round of the playoffs.

Via USA Today
“It is understandable why the Lakers made tweaks to their roster instead of keeping some core players from last year’s title run in hopes of having a younger and fresher roster. But expect the Lakers to make changes this offseason.

No, James and Davis won’t and should not go anywhere. But can’t see why the Lakers would have any interest in keeping Dennis Schroder, Andre Drummond and Montrezl Harrell. The Lakers should keep Alex Caruso and Talen Horton-Tucker since they’re mostly reliable role players. But expect Kyle Kuzma to be attached in trade talks considering his team-friendly extension and his failure to have season-long consistency.”

According to NBA reporter Evan Massey the Kings and the Thunder are two teams that have shown interest in a trade for Kuzma.

“(Kyle) Kuzma’s value is not extremely high right now, but both the Kings and Thunder have interest in him. That isn’t to say they’ll make an aggressive offer, but they’re definitely teams to watch in this situation. It isn’t likely that the Lakers’ asking price will be sky high, and it seems like a deal could be had for any team that believes in Kuzma’s potential and talent.”

Amid all the trade rumors fans noticed that Kuzma had removed all mentions of the Lakers from his bios on Instagram and Twitter.

Throughout his time in LA Kuzma has dealt with trade rumors but we’ll have to wait and see if he finally gets dealt this offseason.