Kyle Lowry Got Pushed By A Fan After Diving Into The First Row, Again 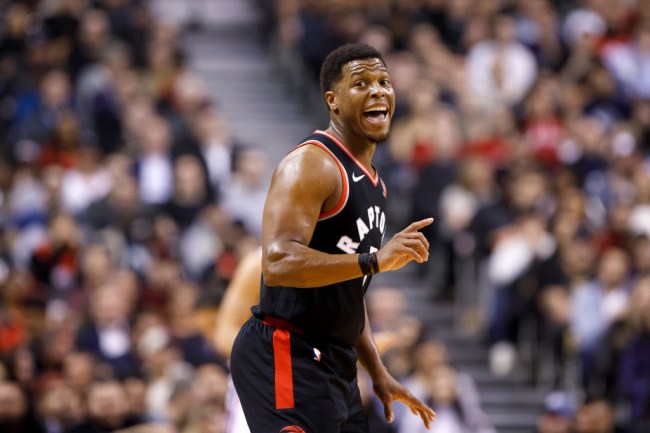 Kyle Lowry hasn’t had much luck when it comes to diving into the crowd.

The first incident with an NBA fan came during Game 3 of last year’s NBA Finals against the Warriors. He went all out for a steal during the fourth quarter of the game and dove into the first row of fans at full-sped. One fan, who actually turned out to be a minority owner of the Warriors, didn’t love the move and decided to give him a shove.

Getting shoved by a fan once in your career is a pretty rare feat, but on Thursday night Lowry got shoved by yet another fan.

Lowry and the Raptors were in Cleveland to take on the Cavs and during the fourth quarter, Lowry went for a loose ball (and saved it) but laid into a couple of fans in the first two rows sitting courtside. Some guy in a not so great blue pullover and matching blue hat shoved him back on the court.

As you can see, Lowry took notice and turned back real quick. The fan, however, didn’t move an inch with any sort of reaction, probably because he was literally petrified.

How can you not love @Klow7 pic.twitter.com/Y0MwbwdTam

This man just shoved an NBA player onto the court and casually crossed his arms to get back to watching his Cavs earn another loss.

Lowry was, of course, asked about the incident after the game by the media and said that he didn’t know if he’ll be able to control himself if another fan decides to push him.

2/2 "because next time it happens I don’t know if I’ll be able to control myself and hopefully I will but …I couldn’t really react because I was in mid-play, but it will come up. Fans like that shouldn’t be in our buildings, in our arenas."

It’ll be interesting to see if any form of punishment is handed out to the fan. It’s not too hard to find who the people are sitting courtside at an NBA game.